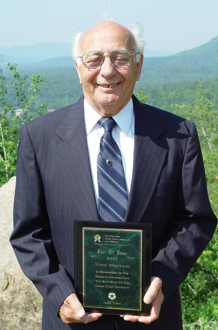 Nino Montani with the Hall of Fame Award he received from Credit Union Association of New York.

Longtime credit union volunteer Nino Montani recently retired from his position on the board of directors of Niagara's Choice Federal Credit Union. The board unanimously elected him to the newly created position of director emeritus in recognition of his outstanding service to credit union members.

The Credit Union Association of New York hall of famer has devoted his life to the philosophy and success of credit unions, as well as to promoting credit unions' place on the larger financial landscape.

"Nino has dedicated much of his life to the betterment of credit unions," said Jerry Petito, president of the board of directors at Niagara's Choice FCU. "He has also had a significant impact on the stature of credit unions at the state and national level."

Montani has been a devoted credit unionist since 1952 when he helped initiate the process that led to the founding of Hooker Employees FCU in June 1953; now Niagara's Choice FCU. He helped grow the member-owned institution into a $72 million, full-service credit union in Niagara County, serving more than 13,000 members.

At Niagara's Choice, Montani served for 25 years as treasurer, as well as volunteer secretary, vice president, and president of the board of directors. He also volunteered at the state level, serving on the Niagara Chapter Council as president, and as a very active CUANY board member and booster.

After a 40-year career, Montani is a retired principal control engineer with Occidental Engineering, and also retired as a consulting engineer, a position through which he assisted on special projects worldwide.

Nino and his wife, Mary, are the parents of three children, several grandchildren, and reside in Niagara Falls.