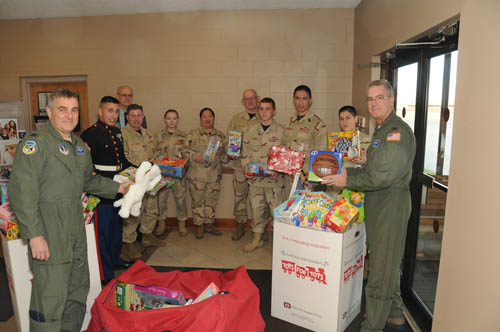 Commanders from the New York Air National Guard's 107th Airlift Wing met with local Marine Corps representatives Tuesday for a Toys for Tots drop-off for bags of donated toys by members of the 107th Airlift Wing.

The toys were initially donated for Operation Santa Claus, a 107th Airlift Wing initiative that reached out to children from the Niagara Children's Education and Treatment Center to bring the children a little holiday cheer.

Santa Claus arrived Dec. 11 on a C-130 aircraft and delivered gifts to the delighted local preschoolers on base.

Due to the overwhelming generosity of the New York National Guardsmen, there was an overabundance of donated toys from this operation. They in turn reached out to the local Marine Corps representatives so these additional toys could be delivered to local needy children and spread even more holiday cheer.

This is the third year that the Niagara Youth Marine Cadets have been collecting toys for the Toys for Tots program in conjunction with the Marine Corps League and Marine Reserves India Company in Buffalo.

"The area Toys for Tots has received only about one-third of past year's donations, so this delivery of toys will be a great addition to the drive," said Capt. Elizabeth Springer, operations officer.

"This is great with the community to have both branches of the military helping out," said Staff Sgt. Erik Sanchez," the group's Marine Corps advisor.

"It is great that we have the opportunity to help out our sister service with such a worthy campaign," said Col. Jim McCready, 107th Airlift Wing commander. "The caring generosity of our unit members for those less fortunate will be passed along in the form of Christmas gifts to our local community. It is our chance to give back."

The Cadets range from 10 years to 19 years of age and participate in weekly drills held at First Assembly of God Church, 9750 Niagara Falls Blvd., Niagara Falls. NYMC Cadets must pass a 16-week "boot camp" in order to earn their title of Marine cadet. They receive instruction in military grooming and development such as drill and ceremony, customs, courtesies, uniformity, rank structure, chain of command, and physical training. Cadets participate in fundraising and community service regularly.