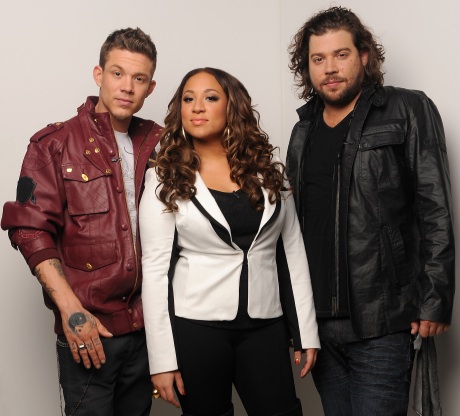 After Thursday's elimination, only three finalists remain in the "The X Factor" competition: Melanie Amaro, Josh Krajcik and Chris Rene. Tune in for the two-night finale Wednesday, Dec. 21 (8 to 9:30 p.m.), and Thursday, Dec. 22 (8 to 10 p.m.), when Melanie, Josh and Chris battle it out for "The X Factor" title.

On the results show, Marcus Canty, one of L.A. Reid's finalists from the Boys category, was eliminated. Host Steve Jones revealed that more than 30 million votes were cast and that Canty of Bowie, Md., received the fewest votes and was sent home.

In addition, Florence and the Machine performed "Spectrum" and Nicole Scherzinger sang "Pretty."

Next week, Melanie, Josh and Chris will take the stage during the last performance show of the season and compete for America's votes, "The X Factor" championship, a $5 million recording contract with Syco/Sony Music and an iconic Pepsi commercial.

Immediately after next week's performance show, fans will be able to vote via 1) Twitter attwitter.thexfactorusa.com; 2) Verizon Touch Voting on The Xtra Factor App on Verizon Android devices; 3) toll-free calling; 4) text messaging for Verizon Wireless customers; and 5) online at TheXFactorUSA.com. Fans with valid Facebook accounts can also vote at Facebook.com/TheXFactorUSA.

Tune in the following night, Thursday, Dec. 22, for the special two-hour grand finale results show that will feature surprise guests, special performances and, of course, the naming of "The X Factor" winner.

Visit www.TheXFactorUSA.com for up-to-the-minute news, videos and information. Become a fan of "The X Factor" on Facebook at www.facebook.com/TheXFactorUSA. Follow the series on Twitter @TheXFactorUSA and join the discussion at #XFactor. Also, follow the judges: @SimonCowell; @PaulaAbdul; @LA_Reid; and @NicoleScherzy.