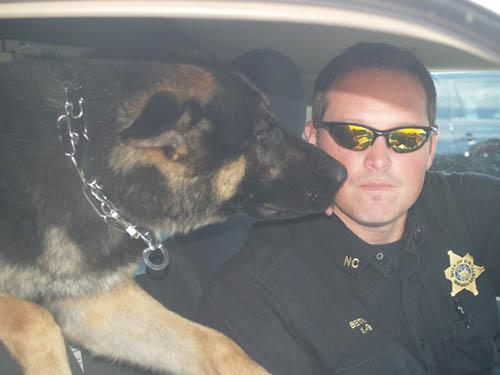 During the search, Rocky, who was not on leash, entered the outside roof area of the six-floor building and was checking for suspects. Rocky left the roof area at least twice, and when he returned a third time, Rocky leaped over a three-foot retaining wall, falling about 60 feet onto a parking lot. There were Niagara Falls officers on the roof at the time who observed Rocky jump over the low wall.

Rocky was a 2-1/2-year-old German Shepherd who was born in Germany. Rocky and his handler, Deputy Craig Beiter, trained at the Oneida County Sheriff's Office in Oriskany, N.Y. Rocky was a New York State-certified tracking and narcotics dog and graduated at the top of his class in the spring of 2009. Beiter and Rocky worked patrol and often assisted other police agencies in the Western New York area. Rocky recently located key evidence during a murder investigation at a Wal-Mart in Orleans County and helped track a murder suspect in Albion this past summer.

On Rocky's first day on patrol, he tracked and located a wanted suspect in the City of Lockport. Over his short two-year career, Rocky was responsible for seizing more than $120,000 in cash and drugs, most notably a large marijuana seizure at the Fashion Outlet mall in the Town of Niagara. Rocky made numerous criminal apprehensions and was a very intense working dog, but will be best remembered as a kind and gentle dog who loved spending time with children, according to the Sheriff's Office. He was the highlight of the Niagara County Fair and is well known by thousands of school children throughout Niagara County. Rocky especially enjoyed his time at Starpoint School helping Beiter with D.A.R.E. instruction.

Voutour said that Rocky was a valued member of the Sheriff's Office and a true crime fighter to the very end.

Rocky was laid to rest by Deputy Beiter at a private location Sunday night. Plans are underway to have a memorial service at a later date.