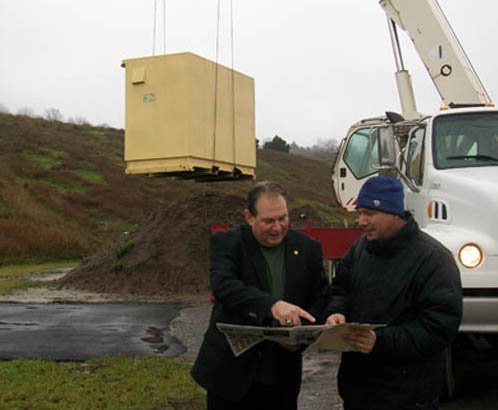 Assemblyman John Ceretto and Niagara County Refuse Disposal District Director Richard Pope were on hand Monday morning as a new and permanent household hazardous waste disposal unit was installed at the corner of Seneca and South Eight streets in the Village of Lewiston. The bin will be used to collect materials such as oil-based paint and aerosol spray cans, which, in most cases, can be recycled and reused.

The 8,000-pound unit is built with two-inch-thick metal. It is fire-rated and explosion-proof. Moreover, it is located down the street from the village's Department of Public Works. DPW Superintendent Bryan Meigs and his crew took classes and are specially trained to handle the materials in compliance with state regulations.

The $20,000 container was financed by the Niagara County Refuse Disposal District, which Ceretto oversaw when he was a legislator. Pope said the new recycling site is the result of cooperation between the county and the village, and research by his and Ceretto's offices. All parties sought to fill a need in Lewiston.

At Monday night's Village of Lewiston Board meeting, trustees will vote on phase two of the recycling initiative, which would be the installation of a 12-by-24-foot, wood-framed electronics recycling "house." This unit would be situated next to the household hazardous waste bin. Its exterior would match that of the Lewiston Public Library, which is located across the street.