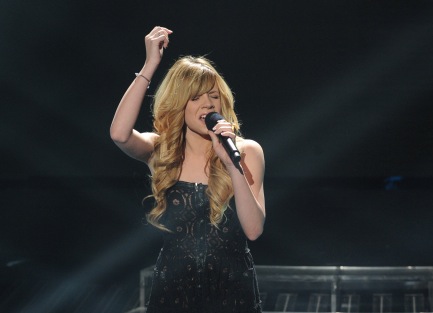 For as difficult as it might've been for 14-year-old Drew Ryniewicz to admit her love for Jesus following her elimination Thursday from "The X Factor," it might've been just as easy for Drew to say her "Save Me" song sucked.

Following Jesus has never been the popular or "in" choice for teenagers; admitting you suck, on the other hand, well, that's easy to do. So, for as much as I admire Drew's bravery in professing her faith to a national audience of 10-million-plus, I couldn't disagree more with her assessment of her final performance.

She was off-key. She didn't follow the music to a T.

Just where did her previous pitch-perfect performances get her? In the bottom three, for starters, and in the crosshairs of judges L.A. Reid, Paula Abdul and Nicole Scherzinger, who still considered her a threat to their teams' shot at winning the "X Factor" title.

Despite Drew's lack of votes, the three judges elected to remove her from the competition in their first opportunity to do so. If you watch the show, then you know they were just champing at the bit to get rid of Simon Cowell's prized performer. It was hardly a surprise when they opted to keep Marcus Canty, who made his second straight trip to the bottom three.

What was up for debate, however, was whether or not Drew could even muster the confidence to perform her "Save Me" song. When "X Factor" host Steve Jones told Drew she was going to sing for her on-air survival, she was a quivering-lip, shaky ball of nerves.

And yet, following the commercial break, Drew came out smiling; poised; full of life. Did she miss a few song cues? Maybe. But, in the process, she showed something we hadn't seen yet -- something her three accusers had told her was missing -- emotion! Drew walked around the stage, her voice soared to hit the high notes, and she rightfully earned a standing ovation from the studio audience.

Did it suck? Hardly.

So, while Drew was classy enough to refrain from blaming her ousting on the three judges -- and to defend her own mentor and performance-picker, Cowell, who said it was his fault she was leaving -- I have no reservations in saying the most godly performance wouldn't have saved Drew from the wrath of L.A., Paula and Nicole.

In the end, Drew said it just wasn't meant to be.

"I don't regret anything and I would never turn back on anything, because there's always a plan and obviously winning 'The X Factor' isn't the exact plan for me," she said.

Speaking to another reporter, Drew said she doesn't expect to become a Christian music star, but that she'll use her platform to profess her faith.

"I definitely, definitely want to be part of secular music -- part of all the different kinds of music," she said. "Overall, what I said at the end, that's why I'm here and that's what I'm believing, but that doesn't quite make my music in that genre."

Ultimately, Drew is not a typical teenager, and she said the past few months have been unlike anything she could've imagined.

"This is unbelievable," she told me of her experience. "Getting to be on 'The X Factor' was just an unbelievable journey, and I couldn't have asked for a better journey to take to go into my singing career, because it was so surreal. I got to work with Simon Cowell and we were like buddy buddy. So, it's something that is worth taking, but it feels like a dream now -- now that I'm looking back at it -- it feels like totally a dream."

"The X Factor" continues on Wednesday and Thursday on FOX. Visit www.TheXFactorUSA.com for up-to-the-minute news, videos and information. Become a fan of "The X Factor" on Facebook at www.facebook.com/TheXFactorUSA. Follow the series on Twitter @TheXFactorUSA and join the discussion at #XFactor. Also, follow the judges: @SimonCowell; @PaulaAbdul; @LA_Reid; and @NicoleScherzy.