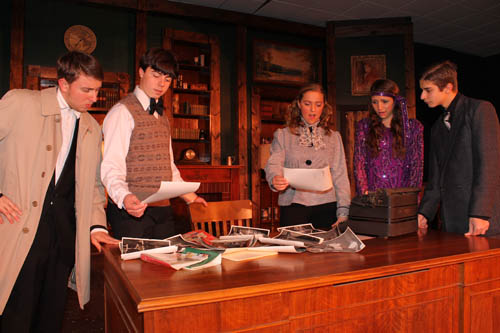 Audience to decide whodunnit in 'Murder By Chance'

Audience participation has added an extra twist to the typical murder mystery with this week's Niagara Regional Theatre Guild production of "Murder By Chance."

As with any good whodunnit, the audience won't know for sure who the killer is until the end of the show, but in a unique wrinkle to the performing experience, even the actors and actresses on stage don't have a clue to the identity of the killer or the murder weapon. That's because playwright Mary Furlong's script calls for a vote of audience members at intermission to decide who they think is the murderer. The cast will then present an ending in accord with audience demand.

"There are different motives and opportunities and different ways the killer kills," Newton noted. It sounds like a version of the popular board game of "Clue."

"It is. It's exactly what it's like," Newton said.

Furlong said the concept had its genesis when a friend who was opening a dinner theater wanted her to write, "one of those murder mysteries where someone among the crowd drops dead, and everybody solves the crime. Well, I'd never seen one. I thought he meant a play."

The idea was to give away a free dinner to who guessed the murderer. "Well, the restaurant only seated 100 people," Furlong said. "I thought he'll go broke before the run is over, so I tried to come up with a way that it would be more difficult."

In Furlong's original script, there were six possible murderers and five possible detectives. Guess the detective and the murderer among the 30 options, and a patron won.

"He ended up giving away three or four dinners a night," Furlong said.

The show is about 25 years old, but is enjoying a rebirth, Furlong said, noting that while she was watching rehearsal at the Ellicott Creek Playhouse this week someone approached her and expressed interest in doing another production as well.

"I'm glad that it's been brought back," Furlong said. "It kind of has a new shelf life, I guess. So I'm very pleased that someone's doing it."

She added that the young actors have really taken to the play's concept, making it fun for a playwright to watch.

The concept will add a level of surprise to each performance, especially for the would-be Colonel Mustards and Miss Scarletts on stage.

"They're excited about it because they all want the audience to vote for them," Newton said. "They want it to be their night to be the killer."

Furlong, from Lewiston, has created a show in which audience members who show up for all three performances could see three different endings.

Furlong said Dawn Newton and her husband, Fran, both Islanders, were in the original production back when NRTG was known as the Niagara Falls Little Theatre. "They played Bunny and Upson Downs."

Furlong also admired the new theater location for the group, in the former St. Edmund's church.

"They've created a really wonderful theater there. A lot of theater groups would give their eyeteeth for that space. It's wonderful," Furlong said. "I don't think there's a bad seat there."

This is the second season the Niagara Regional Theatre Guild has presented an all-area high school comedy. Last year, NRTG performed "You Can't Take It With You."

Newton said the annual youth show benefits the troupe in two ways: it presents a learning opportunity for young actors, and a social experience to meet new people and make fast friends.

"It's part of the guild's mission statement to educate, and educate not only the community, but our younger generation," Newton said. "It gives them a chance to work on a thrust stage, something that they don't have in their high schools. That was really unique to them. And I also think it builds camaraderie, and they get to know people from all different high schools, just as we as adults when we do community theater get to meet all kinds of people."

As well, with "Murder By Chance," the patrons will see a show unlike any other they have experienced.

"I think it'll be fun for the audience to participate," Newton said. "It's very unique, and they actually change the course of the show."