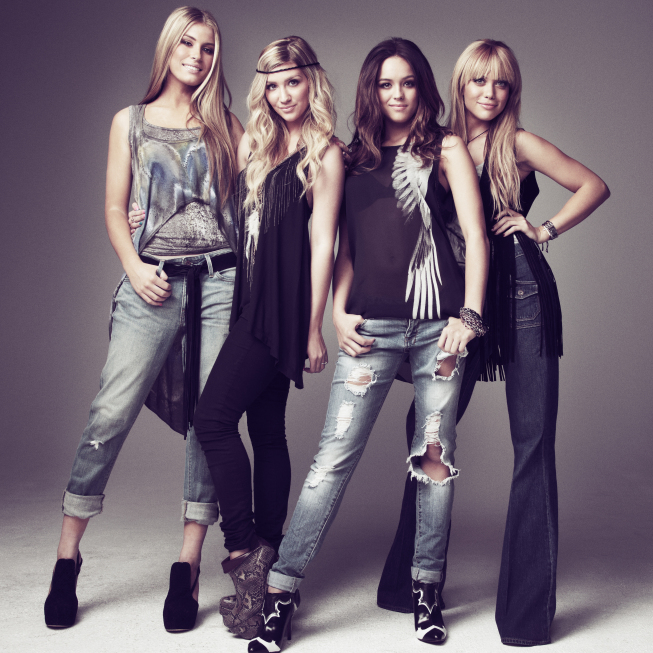 For the four girls, put together after each failed to qualify as a solo act on the show, "The X Factor" was a bumpy ride. Simon Cowell and L.A. Reid regularly chided Paula Abdul's group for song choice, stage setup and even wardrobe. Despite that, Lakoda Rayne wouldn't have traded this on-screen audition (or the opportunity to become a group) for anything.

"A lot of people expected a manufactured group to not be as successful, because we were thrown together and had such little amount of time working together," Orrantia said. "But we actually came together really well. We became best friends and, like, sisters, and I know people are like, 'Well, that would be the safe thing to say,' but it's true, because we laugh like sisters. We play like sisters. We argue like sisters. I think it worked out so well, too, where that we don't want to be apart from each other. A lot of people expected it to be completely opposite."

Though the girls live in different parts of the country, they plan to stick together and continue on as Lakoda Rayne.

"Actually, Paige is staying with me right now, but she actually found a place close by here in Los Angeles County," Knights said. "So we are actually planning on - as Haley and Cari finish school, which we don't really know at this point, as soon as they finish with school - all of us finding a place together here in Los Angeles County. And, of course, working on our music, writing songs. There definitely is a future for us together. It's not something that we're just going to let fade out. We were put together for a reason and we feel like it was fate. We wouldn't want it any other way but to be in a group and make music together."

Though he shined on camera as a vocal solo star, Bell, too, is thinking group. Prior to "The X Factor," he was performing with LeRoy Bell & His Only Friends, and said he plans to return to the rock-soul trio.

"Well, so far I want to do the band," Bell said. "You know, you can still do it solo at the same time if I wanted to. But I have a pretty hot band and so far that's the way I want to go. Everything is always - things happen and things change, but at this point in time we're still together."

The youthful-looking 60-year-old, who actually had a recording contract with A&M at the age of 27, said he auditioned for "The X Factor" after many years of relative musical obscurity.

"Well, really, in the beginning I didn't know that much about the show," Bell said. "My buddy, Stan, told me about the show and I really didn't think about it seriously at first. And then he said there was no age limit. He told me it was going to be a big show and I could get some publicity, because I've been playing around on my own. I've got a band and we've been touring around the United States, but we could never get past the opening act. And so I wanted to get that publicity, and that's what attracted me to it."

Moving forward, Bell is thinking more pop-rock. He said the song choices that best represent his musical style include "the U2 song, 'Still Haven't Found What I'm Looking For,' and 'Don't Let Me Down,' the Beatles song - the last song; the 'Save Me' song. I wouldn't throw out the Sarah McLaughlin song, although I might do it a little bit more different if it were mine."

"I think the song that best represents us as a group and what we want to bring to the industry was actually our last performance, 'You Belong with Me,' by Taylor Swift," Fletcher said. "Honestly, after we got off the stage that night, (what) the girls and I said is this: 'If we go out, it would be on this performance that we want to go out after.' I mean, we had such a good time performing it. It was - for the first time we were just, like, 'Yes, this is it. This is what we should be doing. This is the direction where we should head.' I think it was a good performance to go out on, because that's (what) they'll remember us by, and something that they'll be looking forward to in the future."

Visit www.TheXFactorUSA.com for up-to-the-minute news, videos and information. Become a fan of "The X Factor" on Facebook at www.facebook.com/TheXFactorUSA. Follow the series on Twitter @TheXFactorUSA and join the discussion at #XFactor. Also, follow the judges: @SimonCowell; @PaulaAbdul; @LA_Reid; and @NicoleScherzy.