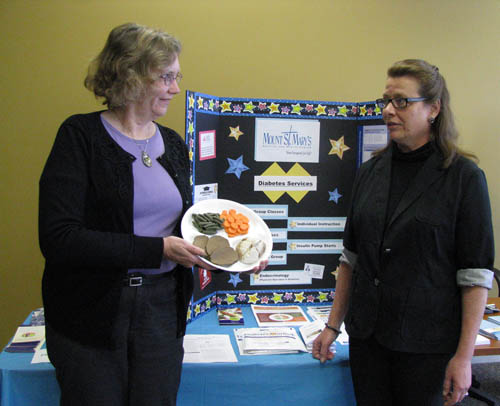 Before overfilling that plate with fat-laden, high-calorie foods this holiday season, consider this: Experts say not only are Americans getting fatter, but the numbers of those who develop diabetes is growing significantly, not only in adults, but in children as well.

Dr. Charles Rice and Debra Hoffman, both from Mount St. Mary's Hospital and Health Center, were guest speakers last weekend at a Diabetes Awareness Day held at Health System Services on Williams Road in Wheatfield. Rice is medical director of the Center for Wound Healing and Hyperbaric Medicine, and Hoffman is a registered dietician and certified diabetes educator.

Most of the food we eat is broken down into a sugar called glucose, used by the body for energy. Insulin is a hormone that puts this sugar in your blood cells. With diabetes, the body can't move the sugar to the cells and the sugar builds up in the blood stream.

About 90 percent of people who have diabetes have type 2 diabetes. They are most often older and overweight. Their body either doesn't make enough insulin or the insulin doesn't work well.

How to make a difference in those numbers? Rice and Hoffman advised exercise, weight control and being more selective of what you eat.

Exercise should be done regularly and be something that makes the heart pump harder. It will help make your body more receptive to insulin, Hoffman said.

"The more you eat, the fatter you get, the greater the risk ... you're not taking care of yourself," Rice said.

"The closer you get to a vegetarian diet, the better off you will be," Hoffman said.

"Stop eating the stuff in the packages," Rice advised.

Fiber fills you up and attaches to carbohydrates to limit the sugar that gets to your gut, but the amount of processing affects fiber's usefulness. Consider that regular or "scotch" oatmeal and instant oatmeal have equal amounts of fiber and sugar, but the instant oatmeal is finely ground, which lets more sugar get to the bloodstream, Rice said.

The more sugar you eat, the more insulin is produced, the heavier you get, and your body starts to develop insulin resistance. Over time, if you keep abusing the system, you develop diabetes, which can lead to complications, including heart attack, stroke, blindness, kidney failure or loss of feet or legs.

A diagnosis of diabetes can be frightening, but Hoffman pointed out that proper medications and lifestyle changes can make a difference. "You can live a long and healthy life with diabetes that's controlled," she said.

"In 2007, it cost $218 billion to treat diabetes and its complications," Rice said. "That's over a third of our health care budget. Just imagine if we could get control of diabetes."

Those who attended Diabetes Awareness Day at Health System Services were enthusiastic about what they learned and the literature and samples they were given.

Wheatfield resident Joyce Albrecht said she attended the event after reading about it in the Tribune.

"I don't know that much about diabetes," she admitted, adding that she had some questions she probably should have asked her doctor, but didn't. In a less hurried environment, she felt she could get more questions answered, such as the workings of her new diabetes blood meter.

Bob Minicucci, president of Health System Services, said his company is looking at possible topics for another free health workshop, which probably will be scheduled in February or March.

The company provides home medical assistance supplies, home oxygen and C-Pap equipment. A certified mastectomy fitter has just been added to the staff. The company not only helps patients get the supplies they need, but makes sure they get any insurance coverage to which they are entitled, said Doug Mooradian, director of marketing and public relations.