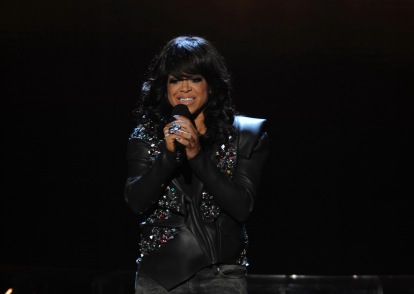 Stacy Francis on "The X Factor" on FOX. (photo by Ray Mickshaw/FOX).

Despite her big voice and even bigger dreams, Stacy Francis didn't win "The X Factor." Ultimately, she's not sure she could've won the FOX reality series. But that didn't stop her from trying.

"I mean, I think that at the end of the day, of course, I would have loved to have won," she told BTS following her elimination last week. "I'm not maybe as confident in myself to say that I think I should have won. I think that everybody in the competition, at the point when you get to top 12, top 10, I think we all definitely have a shot at it. So, I was definitely going for the $5 million for sure. I had my eye on the prize for sure, yes."

What Francis is certain of, however, is that she would've had a better chance at winning had she worked with a different mentor. Francis was teamed with Nicole Scherzinger, who has been the subject of much on-air ridicule from judges Simon Cowell and L.A. Reid.

"Well, you know, I love Nicole very much, but the game was going really, really hardcore," she said. "I feel like Simon Cowell definitely threw me under the bus as a judge. I definitely have an admiration for him as the creator of the show and the executive of the show. That's doesn't go into the game.

"You know, as far as being in the game of the competition, he only stood up -- he gave standing ovations to his contestants. He made it very clear that he wants to take the crown for one of his girls. He was not supporting any other contestant that was not his contestant. And for that reason I would have loved to have been in his category, because he has a very strong voice, and America listens to him and they appreciate what he has to say, and he's very influential.

"Now, as the creator of the show, that was the moment that I had to take last night to thank him as I did, because he gave me the opportunity to be there, and for that I have so much admiration and respect for him."

Visitwww.TheXFactorUSA.com for up-to-the-minute news, videos and information. Become a fan of "The X Factor" on Facebook at www.facebook.com/TheXFactorUSA. Follow the series on Twitter @TheXFactorUSA and join the discussion at #XFactor.