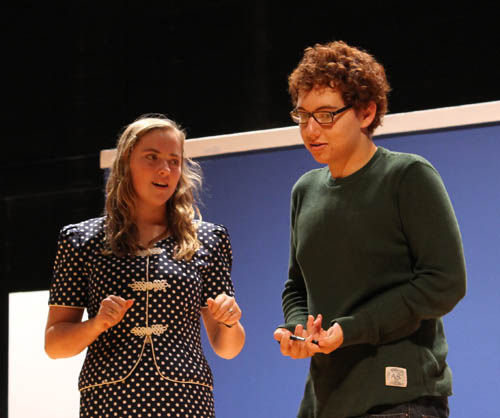 'Don't Drink the Water' Friday (but eat the spaghetti)

A Saturday matinee performance by the Spotlighters drama club at Grand Island High School  will be a family reunion of sorts.

Spotlighters from the school's history are invited to the 2 p.m. performance of "Don't Drink the Water," this year's show.

The comedy includes Tom Rall Jr. in a lead roll. Rall has been in Spotlighters for two years.

"Everybody knows everybody, so it's not so much that it's an island of people who know each other, it's basically just one big family island," Rall said. "And I guess for people who enjoy Spotlighters, myself included, it's not so much about making friends as it is making a family. No matter what differences you have outside of the world, you get that couple hours when you're rehearsing to come together and have a bunch of people who just love what you love and like to do what you do. You feel together, I guess you could try and say. I just love the unity."

Rall said he enjoys Spotlighters so much he wishes he had joined his freshman and sophomore years.

"At the end of the day, we're all just one big nutty crazy Spotlighters family," Rall said. "And I'm really sad that this is my last year."

The audience can combine dinner and theater on Friday, Nov. 18, as the National Honor Society will hold a spaghetti dinner fundraiser from 5 to 7:30 p.m. in the school cafeteria.

•Written by Woody Allen, "Don't Drink the Water," is a comedy that premiered on Broadway 45 years ago, on Nov. 17, 1966. The farce takes place in the American embassy of a country behind the Iron Curtain.

A production of the Spotlighters drama club of Grand Island High School, directed by Magdalene Kennedy and Christina Podlucky.