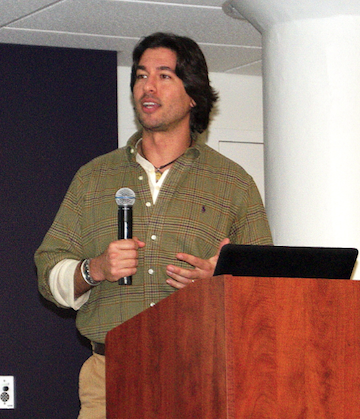 More than 100 students and history buffs gathered to see international explorer Josh Bernstein Tuesday night at Niagara University, as he told of his many adventures and television fame.

"Working for both the History Channel and Discovery, I've traveled to over fifty countries," Bernstein said.

Most renowned for his adventures on television, he began in 2005 as the host of an archaeological adventure series called "Digging for the Truth" on The History Channel. Later, in 2007, Bernstein moved on to be the executive producer and host of the Discovery Channel's "Into the Unknown with Josh Bernstein."

Nina Williams, the director of programming of the Niagara University Student Government Association, explains that other than being a fan since high school herself, bringing Bernstein here is the first step in helping make history fun and interesting for more students.

"We're trying to bridge academics and programming entertainment," Williams said. "We will have more events like this to come throughout the spring."

Bernstein took the audience to five of his favorite places he's been, showing pictures and telling about the significance of each location.  After exploring the Mayan culture in Mexico, he gave everyone a taste of the Salt Flats in Utah, where new forms of life are currently being discovered - under the salt!  Easter Island was the next destination of interest as just that same morning, scientists unveiled the well-known monolithic Moai head-statues actually have bodies - buried under hundreds of feet of dirt.  Next, Bernstein gave a tour of the ancient Egyptian pyramids, and finally the diverse cultures of Papua New Guinea.

As he charmed the audience with his humor and easy-going personality, Bernstein gave students first-hand advice.

"Travel as much as you can. Nothing can enhance your education about the world and life like travel can," he said. "Take advantage of your young mind, and your ability to still be able to go and move around places."

Currently, Bernstein is a contributing correspondent for NBC's "Today" show, and is enjoying his new married life. As far as adventures, he says that the human body can only take about five years of the kind of exploring he does, and he's just about done with his respite. Bernstein invites his followers to stay tuned for upcoming announcements in 2012.