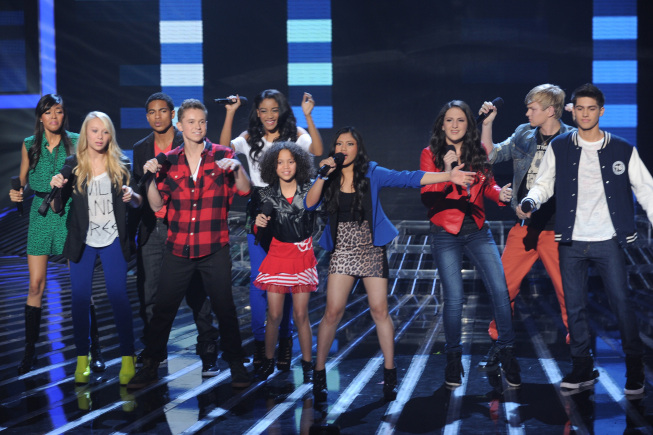 InTENsity sings in front of the judges on "The X Factor." (photo credit: Ray Mickshaw/FOX)

In a surprise move last week, two of Paula Abdul's acts on "The X Factor" were sent up for elimination: InTENsity and The Stereo Hogzz. Despite a best-yet performance by InTENsity, and Simon Cowell's comment that Stereo Hogzz is the best band on the planet, the two groups received the lowest audience vote total. After each group performed an on-the-spot number for the four judges, InTENsity was voted off the show.

In an exit interview with the media (including BTS), the 10-member teenage act, created by the judges for "The X Factor," said there are no solid plans for the future. It's not a surprising response considering seven of the 10 live across the East Coast and three are on the West Coast.

"Hopefully we can continue as a group. We just want to try and be positive. And even though, right now, it might seem like the world is kind of ending, we're just going to try and wait to see what kind of opportunities we get from this," Austin Percario said.

Despite the act's geographical challenge, and the pressure of members meshing together seemingly overnight in order to compete for the show's $5 million recording contract, "Honestly, I'm surprised at how easily and quickly this group gelled together," Francesca Duncan said. "The 10 of us are from different places, and it's crazy how close we've become over such a short period of time. It's going to be so hard separating, going to our little homes in different parts of the country and not being able to see each other every day.

"And we honestly don't know what's in store for us in the future. We really want to stick together as a group, all 10 of us. And we really have high hopes for our group. Our name is InTENsity. There are 10 of us. If one of us leaves, it's not the same anymore. We really hope to stick together and, you know, do things in the future -- hopefully to get, like, signed or, you know, just be successful."

"I think Paula is one of the most amazing mentors, because she was one of the only judges who was there every day -- after rehearsals, studio -- and she would always help us. She would actually be our choreographer. We didn't' have anybody else. She would always make it up, and it was just so amazing having her as a mentor," Ma'at Bingham Shango said.