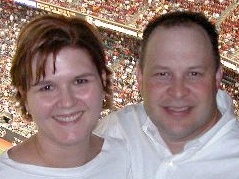 It all started on a Sunday morning last December. Kristi Moore of Lewiston was relishing a rare moment of solitude in front of the TV (mothers of young children know what I'm talking about. ...). CBS "Sunday Morning" was airing a segment on "Beads of Courage," a charitable organization that provides arts-in-medicine supportive care for children coping with serious illness. Kristi was so touched and moved by this story that she wanted to get involved right away.

Kristi called Women and Children's Hospital of Buffalo to inquire about how she could assist here with "Beads of Courage." She was shocked to learn the hospital did not have it. She was told Women and Children's Hospital did not have the funding to initiate the program locally. She immediately called her husband, Rob, and told him they should get involved and do whatever it takes to make the program become a reality here. He was 100 percent in agreement. They wanted to help as much as they both were able financially and otherwise.

Not only did the Moore's dive into this project headfirst, but the program was implemented in Buffalo within just 90 days. Talk about being proactive! Kristi and Rob established "Moore for Kids," a 501 (c) 3 charitable foundation that funds the "Beads of Courage" program in Buffalo.

Beads signify strength and courage. Just like medals, ribbons and certificates, many ancient and modern-day cultures use beads to show bravery and accomplishment. They have long been used to protect warriors from natural and supernatural enemies, along with lending special magical protection for heroes during long journeys. Beads have served many practical purposes through history, serving as calculators (like the abacus), and prayer tools (like the rosary).

Did you know that the Egyptian word "sha" means luck and "sha-sha" means bead? The Magical Eye bead of Turkey is believed to ward off evil. In parts of Asia, beads were scattered like seeds at temples to induce bountiful harvests.

On Dec. 10, "The Beads of Courage in Space Exhibit" will come to Buffalo. More details can be found by visiting www.facebook.com/mooreforkids. If you would like to volunteer, donate, or learn more about "Beads of Courage," you can visit www.beadsofcourage.org.

A worthy cause indeed!