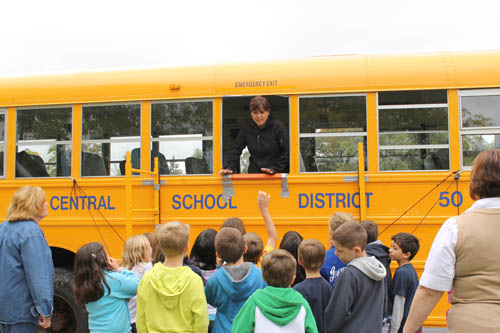 Amy VeRost of the Grand Island Central School District's Transportation Department begins instruction in how to exit a school bus in the event of an emergency. VeRost was part of a team of department personnel who taught students at Huth Road Elementary School safety basics this week. (photo by Larry Austin)

Though the Grand Island Central School District has a good record of safety in transporting students to school, "You can never say you're satisfied," Jack Burns, the district's director of transportation, said this week.

The district is working in advance of National School Bus Safety Week, Oct. 17 to 21, with its program of instruction. Also, Operation Safe Stop is Oct. 17, when district buses will have police cars following along to nab drivers ignoring red bus lights.

"You can never do enough, you do what you can," he said of the district's constant pursuit of 100 percent bus safety all the time. The safety message is one the students have embraced. Burns said Sidway teachers told the transportation personnel that the first thing children were asking the morning of their bus safety training was, "When are we going?" Sidway School kids completed training last week.

"You have Sidway kids wanting to come over here and be in the bus garage. It's something different," Burns said.

Kids enjoy seeing the big buses up on hoists in the garage, Burns said, and they like the district's service vehicle. "We just painted it a dark gray, and all the little boys want to know about 'that black school bus.'" Burns said.

Training is designed to create "a fun learning experience," Burns said, beginning with classroom instruction and a "Winnie the Pooh" movie for the younger children.

The complete training encompasses all aspects of bus travel, from start to finish. Bus drivers teach the children how to cross the road to board the bus in the morning, how to disembark from the bus in the afternoon, and how to use emergency exits in the event of an accident.

Fun and different are the keys to successful safety education, Burns said.

"If the kids are having fun and they're enjoying what they're doing with bus safety, there's a better chance for them to remember to do it," Burns said.

"Even though we've been doing it for a lot of years, this is the first time for kindergarten kids coming in," Burns reminded. "You never want to get blasé about it, or with less effort."

Burns said the program succeeds because of a combination of support from administration, teachers and drivers all looking after bus safety.

"It really is important the fact that the schools are supportive of what we're doing too, and making it work," Burns said.

Burns announced a poster contest for Grand Island students in kindergarten through fifth grade, with a breakfast for winners sponsored by Grand Island Tops. This year's theme underscores the principle of staying out of the danger zone: "Stand Back from the Yellow and Black." Entries are due Oct. 20. Winners and their posters advance to judging at the Western New York and state level.