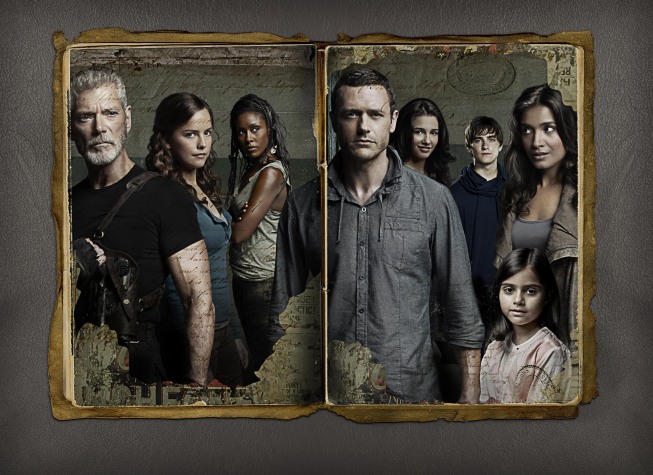 "Ambitious" doesn't begin to describe "Terra Nova," the big-budget sci-fi series debuting tonight on FOX. From its tagline ("An epic family adventure 85 million years in the making") to its pedigree (Steven Spielberg and News Corp. COO Peter Chernin are executive producers), its set location (Brisbane, Australia) to the price of its pilot episode (rumored to cost between $10 million and $20 million), "Terra Nova" is the biggest gamble of the new television season.

The show is a risk for FOX, an "enormous production commitment," in the words of network Entertainment President Kevin Reilly. But it's also a toss of the dice for star Jason O'Mara (Jim Shannon), whose two previous series, "In Justice" and "Life on Mars," failed to land a second season.

The talented Irish actor is hoping the third time is a charm.

"Oh, I hope so," he says. "Yes, third time lucky, is it, maybe? I've never got a show to a second season, so I'm sure people online are painfully aware of this and maybe audiences are as well. What's great about this is that, in 'Life on Mars,' I had the most amazing cast assembled on television at the time, I believe, so I was ably supported in that. 'In Justice' was a great show, but I don't think we were able to make enough noise to kind of break through. But with this I'm really not sweating the premiere, because it's really about whether people are ready for a show like this, and I believe they are."

"Terra Nova" boasts the creative team from "24" and producers from "Fringe" and "Falling Skies." On screen, O'Mara is sharing the load with "Avatar" villain Stephen Lang (Cmdr. Nathaniel Taylor) ... and some pretty big animatronic co-stars.

"It's not really down to me," he says. "The show is way bigger than the actors are. Steven Spielberg's presence is one of the selling points. The dinosaurs, obviously, are a huge aspect of all of this. So we're hoping that people kind of come for these reasons, but stay because they're enjoying the world we've created and the dynamics between the characters and the relationships that are forming."

"Terra Nova" is set in the year 2149, with a dying Earth as the backdrop. The Tenth Pilgrimage embarks upon a journey back to the age of the dinosaurs to push reset on civilization and give humanity a second chance.

The show centers on the Shannon family, namely patriarch Jim, whose "primary goal is to protect his family and ensure that they thrive and survive in this new place," O'Mara says. "He's also been sort of, whether he likes it or not, he's sort of been made the sheriff in this frontier town. So he has to kind of go along with what Taylor does and says and sometimes he has reservations; sometimes he's in accordance to it, but the questions that are brought up sort of affect the very fabric of Terra Nova's society, (which) is being created as we go along."

In addition to the dinos, The Tenth Pilgrimage will encounter a nefarious splinter group with plans of its own.

"As the season progresses and deepens, you'll get to know the characters better and see where we're going with the storylines," O'Mara says.

With all of the above in place, "I really feel like it's out of my hands, and I've done my work, and now it's just a question as to how much of a hit this is going to be," O'Mara says. "I think we might be on to something here, but I've been wrong in the past."