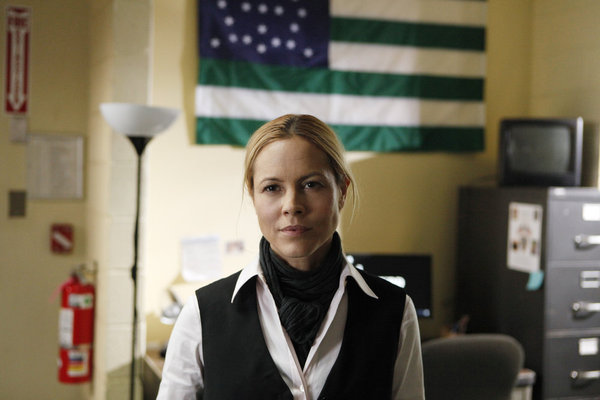 It you watched NBC or read entertainment magazines this summer, then you know it was "The Summer of Maria Bello." From news bits to interviews and commercials to full-page ads, the "Prime Suspect" star was everywhere.

"That's what my mother told me. I haven't seen it," the actress quips.

In one memorable commercial scene, Bello's character, NYPD homicide detective Jane Timoney, is sitting in a fancy restaurant, decked out in a fancy dress ... and proudly sporting a shiner. When asked about the black eye, Jane smiles and simply says she had a "good day" at work.

The clip is a perfect summation of the show, which centers on a goal-oriented female police officer struggling to make it in a traditionally male-oriented field.

"It's the whole idea of I did a great job today. It's like, after that scene we all went out and I went out with all my makeup on, all the 'beat-up makeup,' because it had been such an intense and exciting, adrenaline-filled day at work, and to know that it was a job well done. And I think Jane is like that, too," Bello says. "She doesn't care. It's like scars of the job well done. She's almost proud of it; battle scars."

Jane's bruises are one of the ways in which this "Prime Suspect" differs from PBS and ITV's original, Helen Mirren-led version. Moreover, the "battle scars" signify what executive producer Alex Cunningham sees as a more realistic telling of police life for women.

"Probably the moment that defines our Jane differently from the original Jane is when she gets beat down because that, to me, that was sort of a reaction to all of the times that I see women cops and other law enforcement agents who are women in TV and movies. ... They get in a physical situation with a man who is bigger and stronger and (have no problem) in getting out of the situation with them and (then) beat his ass," she said. "And I just find that completely unrealistic, and it was one of the reasons I wanted to do the show in the first place, is to show there are inequalities between men and women in physically dominated jobs that you're not going to be able to overcome.

"You're going to have to compensate in a different way, which is what Jane does in every realm of being a cop besides that one."

Bello, who went from a supporting role on "ER" to lead roles in films such as "Coyote Ugly" and "The Cooler," says the character was what brought her back to the small screen. Jane has a questionable past, often makes poor decisions, and is far from the seemingly perfect police officers often depicted on cable.

"I hadn't even considered doing a television show for 10 years and then I read Alex Cunningham's script and I hadn't read a woman like this; such a complex woman on television who was so incredibly self-possessed and unapologetic and quirky, and just I knew in my gut that I might have to do this," she says.

Bello was pleased to find the "Prime Suspect" set was more in keeping with the creative freedom she finds on the silver screen.

"Honestly, the writing and this team, these producers and how incredibly collaborative they are and how I got to play (was appealing)," she says. "I was terrified to go back on TV that someone - that I would feel like I was in a box and someone would say, like often happens in TV shows, 'You can't change your words. You have to say this line, line for line. You have to stand there.'

"And I'm so, you know, crazy to a certain extent, like (I) need to create stuff. I would blow my brains out. And so to meet them and to have this instant partnership/collaboration was everything to me."

In turn, Cunningham says she couldn't be happier working with Bello.

"You know, I don't think there is anything she doesn't bring to the table as an actress, of the things that you would want," Cunningham says. "She is intelligent. She is honest. She is completely without vanity. She has this inner strength and confidence where you don't have to reassure her at all. She makes choices and she's collaborative. She's sympathetic."

As Jane struggles to fit in with her coworkers, Cunningham says Bello has easily found her niche with the cast and crew.

"Given that you're setting off on this intimidating journey of making a show that sort of revolves around this one person who, you know, let's face it, in this business, in that situation, has a great deal of power. And if they want to flex it on you, then that's going to happen. And Maria, from the second I met her, it was exactly what she just said about wanting to collaborate and wanting to create together. And also she is just - she's a great, grounded, family-oriented, no bull-crap person.

"You know, she's very about her son and her philanthropic efforts, and she has a well-rounded life and a lot of friends, and she's very close to her family, and she's completely no-drama. And that's the kind of person that you want to work with in any situation, let alone a situation where hopefully you're going to be together for years. You want to be with a person who has every value in the right place and that's what she has a performer and as a person."

"Prime Suspect" airs Thursdays at 10 p.m. on NBC. Find it online at http://www.nbc.com/prime-suspect/.