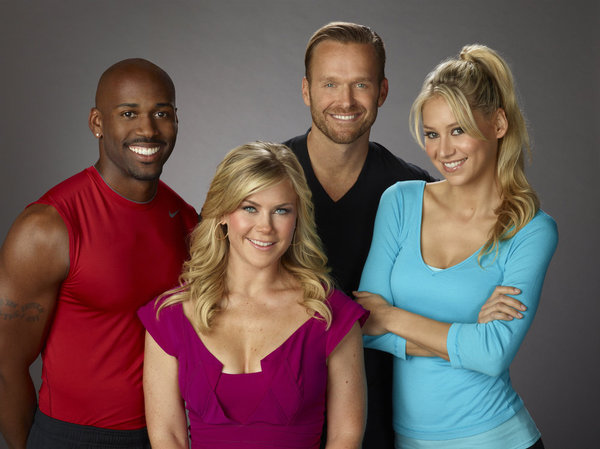 Replacing Jillian Michaels is a tall task, but Anna Kournikova and Dolvett Quince don't appear phased. The trainers selected to take the place of "The Biggest Loser's" biggest star say they've come to work the contestants at the show's weight loss ranch, and not to become reality TV stars.

This is especially true for Kournikova, a former world tennis champion, model and the girlfriend of singer Enrique Iglesias.

"I actually don't like to be on the spot. And on camera I get a little bit tongue-tied and a little bit uncomfortable," Kournikova says "And I - as you will probably see in the show - I screw (up) my English all the time - not that I speak perfect English anyway; as you know I'm Russian. But I actually clam up a little bit on camera.

"The best part about it is when I'm just with the contestants exercising and in the gym. I am totally able to just lose myself with them and be in the moment. And I'm just me. I didn't want to be on 'The Biggest Loser' to be famous or to be on TV or to be in another magazine cover. I've done all of that in my teenage years. So, for me, the whole appeal and the only reason why I wanted to be on 'The Biggest Loser' is not to be, you know, a television star or any of those things. The most important was to live and breathe exercise and help people and just have a positive experience with these contestants and change their lives."

Famed Atlanta trainer and Body Sculptor Inc. creator Quince says, "I don't feel any added pressure, because I've been doing (personal training) for so long. ... I'm very confident with being able to assist people in changing their lives.

"I didn't come there with a mindset of trying to be anything different other than what I am, and that's a trainer.

"The heart of me: I love what I do and I wanted to translate that to these people - especially these obese people that could use my experience. So I walk into it with that confidence."

"I didn't feel like I was replacing anyone or trying to fill in anybody's shoes - not at all. We all have our own styles," Kournikova adds.

In fact, "I was the one that went after this opportunity to be on 'The Biggest Loser' to be able to have the opportunity to train with these people and help them become healthier," she says. "I've worked with the best nutritionists, the best psychologist, the best coaches, trainers - all those things. I've stored all of that information. I've used my body as a tool my whole life on a tennis court being a professional athlete. So, for me, it was just literally instead of now listening to all the information that was thrown at me, I was just repeating it and voicing it to the contestants and sharing it with them."

For the departed Michaels, the worst part of "TBL" was the show's twists and turns, which often result in a contestant's elimination. Quince and Kournikova admit the reality TV setting makes training more difficult, but "You make your work (count). You do the best job you can do with every time that you're given. You know, you make it the best," he says.

Though it may seem contestant/trainer time is short - especially for those sent home early in the season - Quince says he and Kournikova were able to spend "extremely beneficial" time with each rancher.

"We make time. Somehow, someway - and Anna can back this - we find a way to make it work to spend time to help these people change their lives."

"I was there every day with the contestants," Kournikova says. "For me, from the beginning, it was never about a quick fix. I really focused on the contestants to make sure that they get the tools and the information and the education to take home. And even when I was designing exercises for them, for me the key was that they will remember them - that they are able to execute them in their own living room in their own house when they do get off the ranch."

One of the things that motivated Quince about coming on board this season, he says, was the fact that "The Biggest Loser" "is going more lifestyle-based. ... To me, that's huge," he says. "I've been in the lifestyle business for so long it motivates me to be with a team of individuals who understand that it's not just about the quick fix, but it's actually about the entire life - changing your life for the better; be better than yesterday. That, to me, is huge.

Kournikova says she hopes contestants "just really did absorb it."

"It was challenging. It was new for them. But I think by, you know, really a few weeks into it, they really do get a great sense and idea that this is not rocket science," she says. "It's basic, simple math. It is science. But with hard work and willingness to change your life, and the commitment and the sacrifices that their families are making and the sacrifices that they're making being on this ranch sequestered, I think they were committed and they were making things happen."

The new season of "The Biggest Loser" premieres Tuesday, Sept. 20 (8-10 p.m.) on NBC. Anna Kournikova and Dolvett Quince will join "The Biggest Loser" favorite Bob Harper for season 12, training 15 contestants competing in a "Battle of the Ages" that will group contestants by age for the first time ever in the history of the show.

Visit "The Biggest Loser" at http://www.nbc.com/the-biggest-loser/.