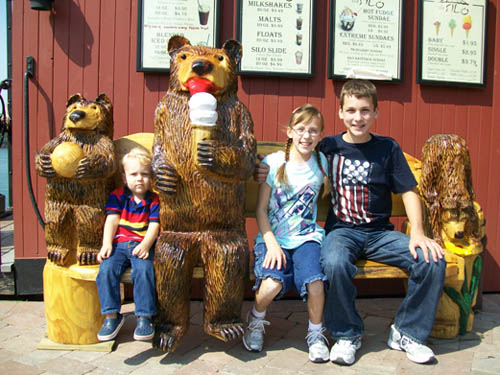 The Silo wraps a super-sized summer

With weeks of warm weather and the residual buzz from a "Man v. Food" taping, The Silo Restaurant had a great summer. In fact, "We've had a landmark season," Manager Alan Hastings said. "We weren't really expecting this much business."

The downside, if you can call it that, was extra long lines of people waiting to receive their orders. So, The Silo is closing a little earlier this year to undergo renovations that will result in speedier service.

"We're making improvements to the kitchen," Hastings said. He is ordering all new equipment over the winter and plans to hire additional cooks. The "bigger and better" kitchen, he said, will relieve the pressure and "stop the backups we're getting on busy days."

The Silo's last day will be Sunday, Sept. 25. Hastings is offering customers a coupon in an attempt to generate one final rush and clear out his inventory. Still, he expects to have a full menu until the end.

Then, once the doors are shut, "We really have to get to work," Hastings said. "I don't want to miss any good weather in spring."

Now, the restaurateur could've stayed open until October and foregone improvements if he, say, precooked prepackaged foods like some other grill joints. But Hastings emphatically said he would never, ever, ever go that route.

"Everything is fresh and made to order," he said, and vowed that wouldn't change.

Last summer, The Silo added an 1800s-era caboose to house its ice cream operations and create more space inside the actual silo (where orders are taken and food prepared). Toward the end of the season, the restaurant was featured on the Travel Channel's popular "Man v. Food." Host Adam Richman praised the restaurant and its signature sandwich, the ribeye steak and crispy potato hoagie known as "The Haystack."

Hastings said, "We're shooting for sometime in April (2012)" to reopen.