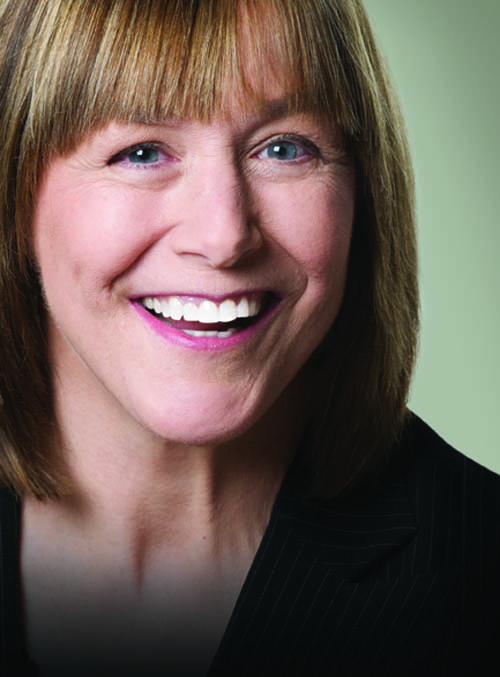 Rivershore Inc. might have been without a speaker for its gala dinner next week were it not for some blind jokes and a few barbs at cerebral palsy in the 1970s.

Keynote presenter Geri Jewell was looking for a way into acting in the disco decade when her friend, Alex, suggested she poke fun at her cerebral palsy.

"He was blind, so he was doing a lot of blind jokes," she said. "And he said, 'If I can do blind jokes, why don't you go to the Comedy Store and do cerebral palsy jokes?' And the rest was history."

Jewell, who was born in Buffalo but lived in California at that time, said, "I always wanted to be an actress and a comedienne - you know, a character actress was my goal. I loved performance. Stand-up was not my first idea. That was Alex's idea. It wasn't something that (I thought), 'Oh, wow, I can't wait to grow up and be a stand-up comic.' It was something that got me in the door to acting, which really was my goal. And it just so happened that I actually was able to do stand-up probably better than I thought I could."

Two years later, Jewell was performing at a media access awards program when she met legendary Hollywood producer Norman Lear, who just so happened to be seated in the audience. The two of them struck up a conversation and Jewell soon began a four-year guest-starring stint as "Cousin Geri" on his series "The Facts of Life."

Having mastered the stage, Jewell became the first person with cerebral palsy to land a recurring role on television.

While such an opportunity - such a platform - might be daunting for some people, Jewell simply said life is an adventure and "There's no room to be afraid.

"I never thought I couldn't do it back then," she said.

While Jewell continued to act and made appearances on "21 Jump Street" and "The Young and the Restless," her next big break came at the end of the '90s - in one of her darkest hours.

In 1999, Jewell had extensive spinal surgery on her C1 to C7 vertebrae.

Fortunately, it was that same year that Jewell met "Deadwood" creator and executive producer David Milch in a Santa Monica pharmacy where she was to receive botox treatment for chronic pain related to her operation.

Milch offered her the role of "Jewel," a disabled cleaning woman at The Gem Saloon.

"I never, ever let go of believing in myself," she said. "He brought me right back to Hollywood."

"What are the odds?" Jewell said. "Two Buffalonians finding each other in a pharmacy in Santa Monica."

The actress was in the running for an Emmy nomination for her guest turn on the critically acclaimed HBO series. While on set, she worked with star Ian McShane ("Pirates of the Caribbean: On Stranger Tides"), whom she called "the sweetest, kindest man you'll ever meet."

Though the show wrapped in 2006, "There is some talk that they might bring 'Deadwood' back for two movies," Jewell said. "All the actors want to do it."

Whether or not that happens, Jewell is keeping busy and looking forward to the next chapter in her life. "I live one day at a time and do the best I can, and I'm grateful that I am able to use the gifts that were God-given to me," she said.

This past spring, Jewell and the cast of "The Facts of Life" reunited to receive a TV Land award.

"That night was so incredibly beautiful," Jewell said.

"It was such an honor to be acknowledged for being the first person with a disability ever to be cast on a primetime series," she added.

"To be reunited with Charlotte (Rae), Nancy (McKeon), Lisa (Whelchel), Kim (Fields) and Mindy (Cohn), and Cloris (Leachman) ... it was an amazing night that I will never forget," she said.

In April, Jewell released her autobiography, "I'm Walking As Straight As I Can." She penned it to give readers insight into her life.

Jewell's first book, "Geri," was released in 1984. She said it brought her additional fame, but, "Really, I was never happy with that book."

Jewell spends her time these days as a motivational speaker and disability advocate. Jeff Irwin, Rivershore Inc.'s director of organizational advancement, said Jewell was chosen to speak at Wednesday's gala dinner because "We were looking for someone in pop culture who has a developmental disability and who really overcame obstacles," he said.

Irwin called Jewell's story "inspiring," and said she doesn't consider her cerebral palsy a disadvantage, but rather uses it to her advantage.

When Jewell speaks to an audience, she said she tries "to motivate them to feel good; to want to make a difference in the world." In other words, she strives "to inspire people to do more."

Rivershore Inc. hosts its second annual gala dinner, "A Celebration of Art & Innovation." On Wednesday, Sept. 21, at the Niagara Falls Country Club in Lewiston. The event begins with a silent auction and hors d'oeuvres at 5 p.m., followed by a book signing with actress and keynote speaker Geri Jewell at 6 p.m., dinner at 6:30 p.m. and the program at 7:30 p.m. WGRZ-TV anchor Maryalice Demler will serve as emcee.

The event includes a silent auction with high-end prizes such as a golf package, a Kindle e-reader and autographed Dan Aykroyd and Buffalo Sabres memorabilia. Proceeds will benefit the Rivershore Foundation, which exists to further the not-for-profit agency's mission to support people who live with developmental disabilities as they pursue and achieve a meaningful life.