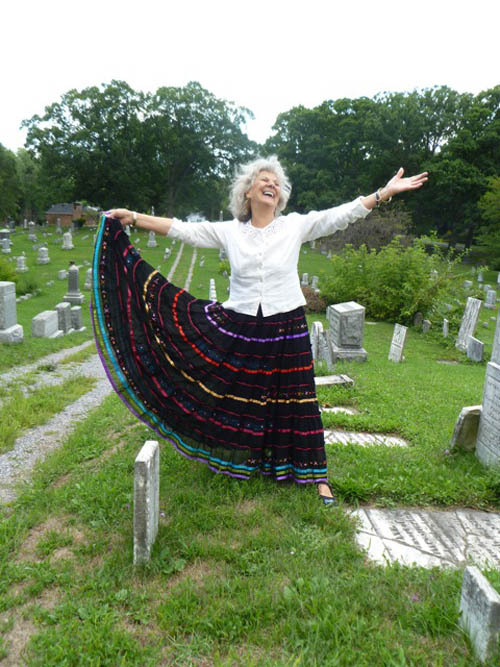 But only on Saturday nights in September and October.

The gypsy is Macy Boswell, one of the historical characters in the Lewiston Council on the Arts' weekly Marble Orchard Ghost Walk Tours.

Macy is miffed at the highfalutin Presbyterian women who snubbed her in the 1800s, so she returns to dance on their graves and "agitate the worms." Sometimes, she will grab a visitor's hand to trace the future in his palm.

Just as interesting as Macy is her portrayer and kindred spirit, Sonja Jonsson.

At age 83, Jonsson is the most senior member of the Marble Orchard cast, as well as the most hardy. Foul weather might deter some of the younger actors, but this mother of three and grandmother of four never misses a chance to tell Macy's tale, even in the pouring rain.

"I have a shawl," she says with a shrug.

Now a Lewiston resident, Jonsson was born in Sweden. Her family lived far out in the country. Gypsies often camped near their home and her mother would take young Sonja to visit them, a welcome change in routine.

Jonsson's children and grandchildren grew up hearing the tales of the gypsies.

Also, while she was training to be a licensed practical nurse in Sweden, Jonsson was dubbed "The Black Rose" by those with whom she worked. Swedes are most often tall and blonde. She was small and dark. A few years ago, Jonsson's tattoo artist grandson inked a black rose on her ankle.

So it was natural for her daughter, Eva Nicklas, Lewiston Council of the Arts artistic director and Marble Orchard director, to turn to Jonsson when looking for someone to portray Macy when the ghost walks started about five years ago.

"We knew that she would be the perfect Macy. After all, she does have gypsy blood flowing through her veins - at least that's the rumor in our family," Nicklas says.

"I was a little reluctant; I'd never acted before," Jonsson admits, but she's taken her role to heart.

Nicklas and Marble Orchard author Tim Henderson wrote her lines, however Jonsson doesn't do anything by rote. "I added a few things," she says.

Jonsson and her husband, Ronnie, came to the U.S. in 1953. She still retains a charming Swedish accent that perfectly fits her character. For instance, she tends to leave the "g" off when she says gypsy.

"My image of a gypsy is all dressed up in jewelry and fancy clothes," Jonsson says.

She models herself on an old portrait of a gypsy dancing that was found in Lewiston's Odd Fellows building on Center Street, now called the Lewiston Opera Hall.

Cast members know that Macy rarely shows up in the same "costume" more than once.

"When I do the part, I feel like I am Macy. But I have to be dressed for it to be able to do that," she says.

Her experience as a Marble Orchard character, and the scary tales her superstitious grandmother used to tell her instead of fairy tales when she was a child, inspired Jonsson to become a self-published author of several books of her own ghost stories. She incorporates characters from the Marble Orchard (including the nun she played in the special Marble Orchard production developed for Stella Niagara's centennial celebration) into her fiction. Family, friends and fellow cast members are eager recipients of these little books. The latest edition even includes hand-drawn portraits.

She laughs when teased about the "sex and violence" in her stories.

"They have to die to be ghosts. I can't just let them roll over and die," she protests.

Every Saturday night as the days get shorter in Lewiston, Ronnie faithfully chauffeurs Sonja to the cemetery and lights the torches that help illuminate the cast and foster the eerie atmosphere. He also serves as a homegrown critic.

"He lets me know when I have been good, or when I've been bad," Jonsson says.

While modest about her own accomplishments, Jonsson is a proud promoter of the Marble Orchard Ghost Walks and its variety of characters, young and old, who have become almost like a family.

"Everybody is so darn good out there," she brags.

Nicklas agrees - "The ghost walks have just gotten better and better. All of the actors have really taken on their characters, and they really love the persons they portray. I think that's what makes the Marble Orchard very special. It's not just an acting job; it goes much deeper than that."

Marble Orchard Ghost Walks include stories of the paranormal and historical truths and legends from Lewiston's past, as well as information about cemetery etiquette and traditions. Walks last about an hour and a half and begin promptly at 7 p.m. on Saturdays, through Oct. 29. Bring a flashlight and meet at the Lewiston International Peace Garden, 476 Center St., rain or shine. No reservations are necessary. Tickets are $12 for adults and $6 for children under age 12. For more information, call 754-0166 or go online at www.artcouncil.org.