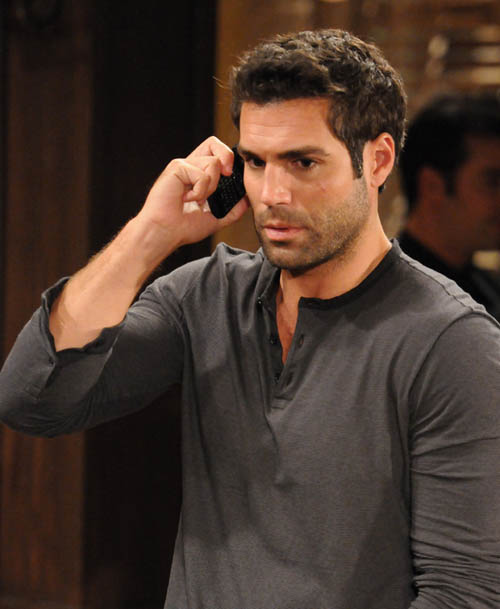 'All My Children's' hot doc reveals all

Stabbed by a fake cop, shot by a not-so-real reverend and seriously wounded by mobsters. Sounds intense, right? For "All My Children's" Dr. Griffin Castillo (Jordi Vilasuso), these are the lengths to which he's gone to prove his devotion to the one he loves.

In a phone interview with the ABC soap star, Vilasuso explained his role of Dr. Griffin Castillo: the good - doctor, brother, friend; the bad - his "broken heart;" and the ugly - the show's cancellation.

The love, drama and hot shirtless scenes started in November 2010 when Vilasuso made his "AMC" debut and won over the hearts of Pine Valley fans. Vilasuso says his character on "All My Children" is unlike the role he previously played on "Guiding Light."

"They are two completely different characters," said Vilasuso. "Griffin is much more of a grown-up adult and professional. Tony was a hothead; wet behind the ears. He didn't really think before he did things. Griffin is concerned with helping humanity. At the end of the day, he has to work on himself and putting himself out there in a real, emotional way."

Vilasuso's adventure to Pine Valley began when he and sister, Cara (played by Lindsey Hartley), stirred up some "trouble." What should have been peaceful time for the brother-sister doctor duo quickly turned into chaos and tumult. Cara saw fellow doctor and ex-hubby Jake Martin and, after realizing she still loved him, caused serious problems for him and his current wife. Griffin, meanwhile, fell in love with one of his patients, something he told himself a professional doctor would never do.

If Griffin breaking his own code of ethics provided inner turmoil, what followed was even worse. The woman he was treating in the hospital, dating and madly in love with, discovered her deceased husband was not actually dead. In fact, the man is very much alive and recovering.

It's a love story with a not-so-happy ending (or so we think).

After Kendall Hart Slater's (played by Alicia Minshew) husband was "murdered" in a cliché plane crash, she never thought she could recover from her loss, let alone find love again. After months of beating around the bush and toying with Griffin's emotions, working to put the man who was responsible for her husband's plane crash away (with the help of the devoted hot doc), and trying to figure out the truth, Slater followed her heart and starting dating Griff.

It seemed perfect - a gorgeous couple who understood each other. Kendall endured a lot of emotional pain from the death of her husband, and physical pain from a heart condition. Of course, Griffin was there for her every step of the way. He treated her as a heart patient and wiped every tear through her distress.

Then the worst happened, something more devastating than any sad storyline, such as Angie losing her eyesight and innocent Dixie dying. ABC announced it was canceling two daytime soaps, including "All My Children" in May. Plans changed drastically; The Griffin-Kendall storyline was cut short.

"It could have been a beautiful love story that went a different way," said Vilasuso. "He is very committed to Kendall in a way that's pretty noble and hard. He's perpetuated himself in a way to show his feelings and true devotion to her. I thought to myself, 'If this is real love, we can do this.' Maybe after a few months, you would know if it's real. But then he came back."

A soap opera could not be true to its name unless some storylines were a little far-fetched. Since the show announced its cancellation, many old characters (including Thorsten Kaye's Zach) are set to return to help end the show's on-air run with a bang.

"It's really a 50/50 thing," said Vilasuso, talking about Kaye's return. "He and Kendall were together for seven years. I get it. I didn't realize how naïve I was to the whole thing, and thank God, because I don't like to know too much and it was just difficult to deal with. As time went on, I got to know Alicia, and she helped me understand and know soap opera genre. She helped me understand what was going on with the fans, and fan base, her and Zach. We hope that works out. It was a good at-bat. I don't think Griffin won the game, and that was one of the things out of my power. "

Oh, David Hayward, why are you so conniving, yet brilliant? Griffin was working for David, the most intelligent, but devious doctor throughout Pine Valley. They were at work on a project Griffin didn't fully understand. Project Orpheus is what brought Zach, Dixie and maybe a few other beloved characters back from the dead. David, himself, coordinated and had others do extensive research on what perhaps is the greatest, strangest gift to medicine. Amongst the researchers is Griffin, but did he, too, cross the line between genetics and distortion?

"He always had that Zach (was) maybe alive in the back of his mind," said Vilasuso. "That was what made him step away from Kendall. I wanted to put the brakes on it before it loses control. It would have been harder for the public if they (Griffin and Kendall) had been intimate with each other. That's why he had to step back. He had to find out what was going on. Griffin always had David's back, thinking of this whole thing (that) he may be doing a lot of good, but it's not right. It's genetics, but when do we cross the line? It's fun to play."

Grendall fans, don't give up. There may still be hope!

After surviving a plane crash and being without his wife and children for seven months, it seemed obvious Kendall would be back in Zach's arms after his return and completely forget about Griffin. Not so fast. Two weeks ago, Zach gained strength and was talking to Greenlee (Kendall's best friend) in the hospital. He looked worried. Greenlee asked him if he was upset because of Kendall's heart condition and his response spoke a thousand words.

"I'm worried she may have given her heart to someone else," he said.

Nothing like complicating the situation more than it already is, right?

"I think it sucks. It is a horrible sucky, situation," said Vilasuso. " I feel like she wants Zach back, but kind of doesn't. In the end, it's up to her; she's the one with the husband and the kids. It sucks he's back, and it's a struggle being a professional and saying, 'Oh, I'm happy.' One of those things. It's dynamic, and it's more interesting to play than 'I'm in love with you.' We're all complicated and it's our job to communicate with those things well."

Here's the million-dollar question: What is to come for the future of Griffin and Kendall? Will they end up together? Will she break Griffin's heart and fall back in Zach's arms?

"Zach and I will deal with each other. It is going to be an interesting dynamic. Fans will appreciate what is to come. There will be some closure of what's to come. Part of it is what I want. It could get ugly. There may be a little more bloodshed," said Vilasuso.

ABC announced "All My Children" will be officially off the air in early September but, thanks to fan reactions and uproar, it will be re-cast to an online series. Vilasuso said plans have not been yet finalized, but showrunners are currently in the process of assigning actors and actresses.

"It's definitely going to take some time," he said. "We're going to find a way through. I'm hopeful."