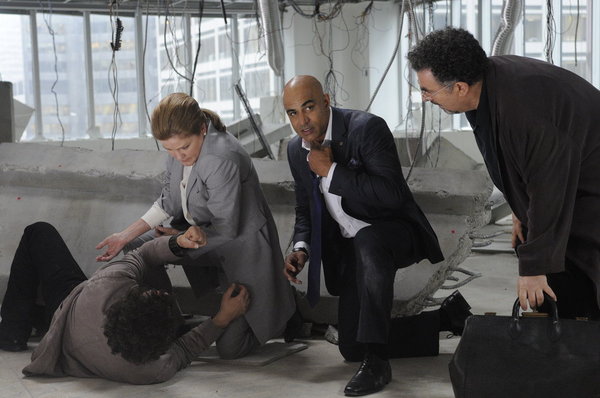 The actress plays a Regent with a personal connection to one of the warehouse regulars.

"I come as a very powerful Regent bearing an extraordinary secret," Mulgrew says. "And when the secret is revealed I think the audience will be, to say the least, quite surprised. It's both wonderful and rather frightening at the same time. And the arc is thrilling because I'm not just any Regent; I have great powers. And so I think what unfolds will be very, very surprising to the audience."

The Regents, in effect, serve as a governing board for the warehouses and the mystical, often deadly artifacts held inside each one. Tonight, these members find themselves under attack from a group with a surprising collection of its own.

"This woman, Jane, is a mother, a person, a teacher, and the powers of the Regency have been endowed, because it was her personal choice to help," Mulgrew says.

Like Ryan ("Voyager's" Seven of Nine) before her, Mulgrew says she had a blast on the "Warehouse 13" set.

"Saul Rubinek (Artie) is one of the great actors, I think, of our generation - certainly my generation. And, I felt, he's consummate and he's unexpected. So I had to step up to the plate whenever I was acting with him," she says. "Joanne Kelly (Myka) is like a delicious confection. And Eddie McClintock (Pete), I would have to tell you, as well as Allison Scagliotti (Claudia), are natural actors. So it's like playing ball."

Mulgrew also enjoyed playing with the show's special effects. Thanks to its storyline, "Warehouse 13" boasts an assortment of interesting props and devices.

"I got to play with all those toys, and lots of artifacts to boot," she says. "And that's the other thing ... the beauty of it is you're working in a warehouse and every one of these artifacts is rooted in truth. So I have to tell you, I mean, I was there for four episodes - I don't know how many weeks that would be - but I was learning so much. I mean, the Caloti bracelet is based on something that's true. And whenever I get to learn, I'm at my happiest. So the artifacts were fascinating, and there was the Farnsworth, I think that's their sort of ... their tricorder, if you will. And that was fun to work with. And I'm very familiar with the green screen and the blue screens and I know what that means. So that's always a challenge. And it was great fun."

Though she's a former "Star Trek" captain and a bona fide science-fiction icon, Mulgrew doesn't "get offered these sci-fi parts. This was the first one. And I was delighted to take it because it was not only so well written, but it was - it felt different to me. It felt special, and it felt light and smart. And that's what I want," she says. "It didn't carry with it the baggage of some other science fiction shows. It has a real delicacy to it and, at the same time, I think it's, as someone had said before, a well-oiled machine. Yes, but it's still a very sleek and well-run machine."

"Warehouse 13" airs Monday at 9 p.m. on Syfy. Follow the show online at www.syfy.com/warehouse13.