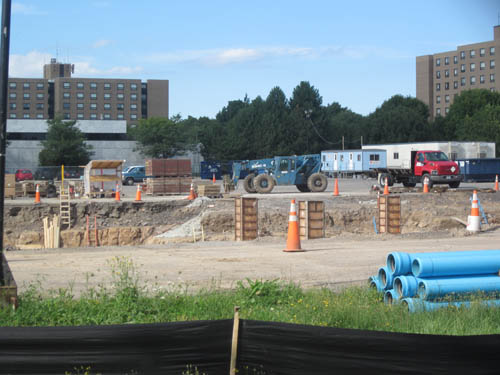 Construction is under way on Niagara University's new science building, which will lie in the main parking lot. (photo by Lauren Merrick)

Big changes are happening on the Niagara University campus. Some of these include major renovations to the Gallagher Center, the addition of new academic programs, changes for the academic calendar, a new set up for student records and financial services and, last but not least, more parking.

The parking lot project, costing around $2.5 million, has been completed. The main lot located beside the Castellani Art Museum has been replaced with expansions of both the Dwyer and O'Shea lots. In total, there are roughly 60 more parking spaces on campus as a result.

The area for the new science building is fenced off and will be worked on for two more years. The $28 million-plus project is expected to be finished at the end of the spring 2013 semester.

Perhaps the most drastic physical changes happening this summer are those of the Gallagher Center and the enrollment offices.

"The university funded these two projects mainly through generous private donations, plus some of the normal funds we would use for such projects," says Executive Vice President Bonnie Rose.

"We are moving back in this week and next week - on schedule. Finishing touches and some of the new furniture will continue to arrive through September," says Assistant to the President for Planning Judith A. Willard.

A new student organization office and a multipurpose room are two of the most notable changes.

"The lower level of the Gallagher Center lacked appropriate meeting and programming space," says Vice President for Student Life Kevin Hearn. "These new spaces, in addition to renovations to existing spaces, will allow more student interaction with each other and other campus constituents - not to mention a larger variety of programs," Hearn says.

The new student organization office will include a conference room, which will be shared by all organizations, and some separate offices for certain groups that require this extra space.

"It's not a cure-all, but I think it's going to help communication between clubs," says Assistant Director of Campus Activities Bill Newton.

"Our student organizations needed a better place in which to work, and all our students needed better space in which to gather informally or for special events," Rose says.

The multipurpose room is another new addition, with tables and seating for 200 students.

There will be a game room where the records office used to be, three large TVs and a variety of new furniture.

"Purple signage and furniture are definitely going to be added," Willard says.

"It's tough because we have to blend it in with the existing furniture," Crumb Kosmala says.

Her goal is to have everything match long term.

As for the Upper Level Gallagher Center, new locker rooms, visitor lockers and a training room will be available.

"The renovations to the back end of upper level Gallagher will bring our very outdated facilities for our basketball programs into line with NCAA requirements," Rose says.

Student Records and Financial Services, now located in the Butler building, is currently operational, but needs some finishing touches before the semester begins.

"New cashier and customer service counters are being designed and will be installed early in the fall," Willard says. This office consists of three departments: financial aid, records and student accounts.

"It's been in NU's strategic plan for the last six years," Willard says.

"There were lot of complaints from running around to different departments. ... The goal was to make life and everything at NU much more convenient," Willard says.

"They (students) will be met at the front desk by staff who are trained to help handle simple matters related to records, financial aid and accounts, all in one stop. For more complex situations, they will have more 'seamless' access to specialized help," Rose says.

This new "front line system" is meant to connect students with someone who can help them directly and efficiently solve problems.

These services were moved out of Lower Level Gallagher Center, allowing more available space for students. "As we talk about the future, these three offices were more and more digital," Willard says. Therefore, less space was needed.

There are also renovations in O'Shea Residence Hall this summer. The lounge is being re-done with new carpet, game equipment and furniture. Also, the furniture in the dorm rooms is being replaced with flexible replacements, including a wardrobe on wheels closet set up to replace the former stationary wooden closet units.

Since June 13, Timothy M. Downs has been the vice president for academic affairs, allowing Rose to fully focus on her position as NU's executive vice president. Downs previously served as Gannon University's dean of humanities, education and social sciences and has more than 25 years of experience overall in higher education.

Downs isn't the only new addition to NU's academic affairs.

"This fall we will be bringing in our first new leadership and policy Ph.D. program delivered out of (the College of) Education," Rose says.

The program is geared toward developing leaders for education institutions and other organizations.

Students will focus on developing strong leadership skills and decision-making abilities for managing institutions and their futures.

There is also a new masters program in early childhood and special education. Students in the program will work toward New York state teacher certification in the field.

Also, the College of Business now has a health care administration concentration option for graduate students in the MBA program.

NU's college of hospitality and tourism management now has a dual degree exchange program with the International University of Applied Sciences in Bad Honnef, Germany. This joint effort allows students to graduate with degrees from both NU and IUBH.

The College of Arts and Sciences has a few additions as well. The communication studies program now offers courses in digital media production and communications law.

There are also new minor programs in forensics, public history and Web design.

Besides programs and course offerings, NU has changed both its orientation schedule and its academic calendar for this academic year.

The new student orientation will be extended throughout four days. "The design allows for more time to address different orientation topics, from academic readiness and rigor to time management, financial awareness and alcohol education," Hearn says.

Activities such as a walk to the falls and a concert at Lewiston's Artpark are just a couple of the events. The goal is to engage students, not only within NU's campus, but with its surrounding communities as well.

"The changes were proposed, discussed and decided on by all facets of the university community, including (the Niagara University Student Government Association) and the faculty senate," Hearn says.

Additionally, students will now start school the day after Labor Day instead of a week before. The main reason for the change is so that students with summer jobs can work the Labor Day weekend before returning to school.

Also, the spring semester will commence a week earlier than in previous years, which is meant for students to get out into the workforce sooner.

Although numerous changes happened at NU this summer, more are expected to come.

"New projects are always being discussed as NU seeks to position itself to attract and support the students of tomorrow and their various needs, in and out of the classroom," Hearn says.