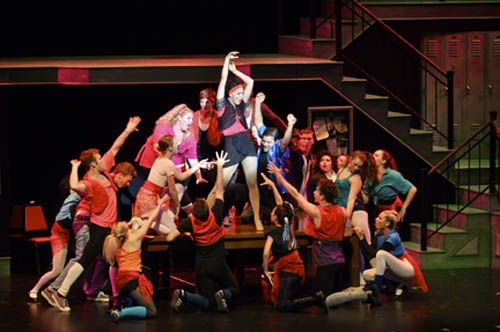 Carmen (Lucy Ann Werner) leads the charge of "Fame" at the New York City High School for the Performing Arts. "Fame - The Musical" is on stage this weekend and next at Artpark. (photo by Matt Buckley/MMBArts Photography and Artpark)

Set in 1980 at New York City's High School for the Performing Arts, "Fame" tells the tale of a ragtag group of students, each one dressed as befitting the decade of Madonna, Spandau Ballet and "Miami Vice," and praying to become a real, live star. Though these teens are the cream of the crop of a vast applicant pool, they're told right from the start success will only come from hard work. Their subjects - acting, dance, music - are "the hardest professions in the world."

With '80s backbeats afoot, we meet the drama-loving student body: Tyrone (Elijah Coleman), a skilled dancer whose step-mastery is offset by an inability to read; Nick (Steven Copps), a child actor who is desperate to prove he's more than commercial material; Lambchops (Nicole Cimato), a stylish, punk-rock-loving drummer looking to form a band; and über-talented Carmen (Lucy Ann Werner), who could win a handful of Grammys and still be called loose by her mother.

As the performers move from classroom to dance floor, we ping-pong between couplings. Stick-in-the-mud Nick buries himself in acting books as would-be paramour Serena (Em Laudeman) urges him to lighten up and "play a love scene." Tyrone meets ballerina Iris (Anna Marszalkowski), who is wooed by his dance moves and relates to his upbringing. Girl-crazy Joe Vegas (Jared Loftin) tries his best to woo Carmen, but she has eyes for classically trained pianist Schlomo (Clark Kinkade), and soon joins his band with Lambchops and Goody King (Raphael Andrews).

Each of these stories would benefit from additional material on the subjects. Why, for example, should we root for Serena to land Nick, when we don't know enough about her to care, and we only see him as a major drag? Instead of a full dossier, we get bits and pieces as the timeline rapidly pushes us through four years of high school (seriously, semesters are exchanged in the blink of an eye).

The most interesting relationship is that of Tyrone and Iris. The actors look as if they're in young love; moreover, her innocence and lack is counterbalanced by his passion and sense of entitlement.

Carmen and Schlomo have the most potential as a couple (silver spoon meets urban poverty), but, beyond their first encounter, they hardly spend any time together on stage.

Still, just when we start to feel frustration pangs, "Fame" bounces back with sharp, albeit busy dance numbers. The dance routines are fun, and tightly choreographed by Lynne Kurdziel-Formato.

About halfway through the first act, a magnetic Werner leads the cast in an exhilarating rendition of "There She Goes/"Fame," which is bound to make the audience sing along to the show's most famous song. Carmen is a star, if only in her own mind.

As intermission looms, the story gains some conflict as students and faculty juxtapose theater and academia. The final number is a little anticlimactic (especially in light of the "Fame" dance number) and just a bit weird, with stuffy Nick all of a sudden dancing around in circles center stage.

Act II encourages us to give each pairing a second look as the characters are brought to life a little more. Again, the time jumps don't help, but at least we're given a few more reasons to invest in these students. The ire of Serena, in particular, grows on you as the show continues.

The dance numbers are sleeker and more crisp, yet maintain Act I's playful tone. As the performers draw closer to graduation, the stakes are higher - on stage and in life. The show ends with a fairly large surprise, an optimistic outlook and a great reprisal of "Fame."

Unlike Artpark's previous Broadway musicals ("Aida," "Joseph," "All Shook Up"), "Fame" is a true ensemble cast. Though Werner and Coleman are, essentially, the leads, their performances are not so over-the-top that one overlooks or forgets about the other actors on stage. That type of restraint is, to me, as impressive as their talent.

Credit director Randall Kramer with taking less-than-stellar material, making it more interesting, and producing a show that looks and feels more mature (in terms of presentation) than any of Artpark's previous productions.

Ultimately, whether you focus on the show's flaws, or simply overlook them, "Fame" will entertain you. Plus, I guarantee you'll be singing its theme song for at least a week after you leave the theater.

"Fame" is on stage through Aug. 18 at Artpark. For times and ticket information, check out www.artpark.net or visit our "Fame" Page.