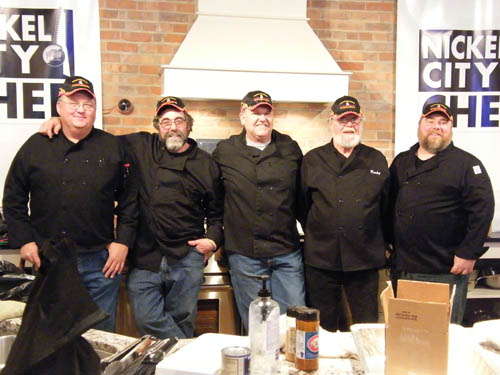 Smokin' Eagles held a local barbecue class in April. From left are instructors and barbecue experts Danny Montgomery of Tennessee, Roy "Honcho" Gregory of Wheatfield, Jeff Danner of Indiana, Rocky Danner of Tennessee, and Robert Giordano, president of The Barbecue Shop in Lewiston. Students included a member of the Dog House Willie team from Wilson that won the grand championship at the recent barbecue competition at Eastern Hills Mall, according to Gregory.

Barbecue is smokin' canalside this weekend

Whether you want to pick up some barbecue tips, see the latest in grilling equipment or just chill out and gnaw on some ribs while listening to live music, the Smokin' Eagles International BBQ Festival is the place to be this weekend.

This fourth annual event has grown considerably since it was first started by Wheatfield resident Roy "Honcho" Gregory and held at the old Summit Park Mall in Wheatfield. This is the second year the event is being held along the canal.

On the North Tonawanda side will be the vendors, the beer tent and entertainment. The barbecue vendors will be trying out some new recipes, including barbecue turkey. There are more vendors this year, and they've guaranteed Gregory not to run out of barbecued food.

"I try to explain to them that people in Western New York love their barbecue," Gregory said.

Other non-barbecue food vendors will be available, as well as vendors of all kinds of barbecue equipment, from sauces and rubs to new grills. Weber Grills is one of the major sponsors for Smokin' Eagles this year, and Recreational Warehouse on River Road is bringing over some of Weber's latest models.

On the Tonawanda side of the canal, will be the actual competition

On Saturday, the Smokin' Eagles' open competition takes place. Kell Phelps, president of the National Barbecue Association and publisher of the National Barbecue News, will be in town for this one, Gregory said. About 25 teams from both the U.S. and Canada are expected to compete. The grand champion wins the right to go to the international Best of the Best competition in Waycross, Ga. Since Smokin' Eagles is now considered a state championship competition, the winning team also gets in the drawing for eligibility to compete in the Jack Daniels competition in Lynchburg, Tenn.

Wheatfield resident Matt Forcucci came in third overall in the first Smokin' Eagles competition. This year, he will be one of the judges for the open.

The teams also will share ideas on how to get started in competition.

"You've got to start somewhere. It's not as intense as it seems," he said.

Forcucci said his own specialty is chicken, although he's been trying more brisket in the past year. He starts with a homemade rub, adding sauce near the end of the cooking time so it doesn't burn.

For those with a sweet tooth interested in competition, on Saturday there also will be an apple pie contest. Applications can be turned in with the pies for this event. Some people are actually cooking their pies on their grills, Gregory said.

On Sunday, the barbecue competition will ease back a bit. That's when the Kid's Q for children and the Backyard Barbecue Competition for adults are held.

Gregory is advising those interested in coming to the Smokin' Eagles International BBQ Festival this weekend to set their GPS for 74 Sweeney St., North Tonawanda, NY 14120. "It's where they have the Canal Fest," he said. For more information, go online at www.sebbq.com.