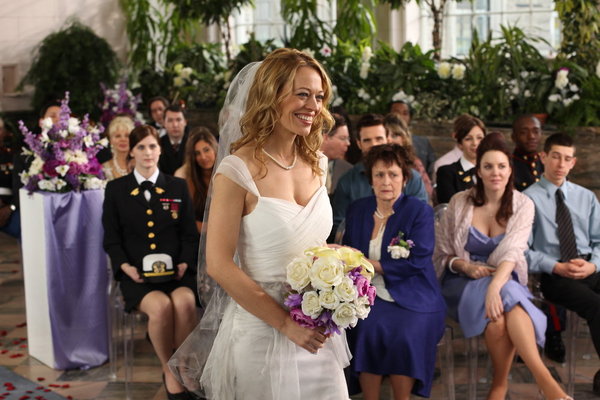 Jeri Ryan, whose role as Seven of Nine on "Star Trek: Voyager" instantly made her a science fiction superstar, returns to the genre tonight when she guests on "Warehouse 13." The actress plays agent Pete Lattimer's ex-wife on the Syfy series.

Though Ryan has a full-time gig on ABC's procedural "Body of Proof," she says sci-fi provides her the opportunity to try things "you don't really get to do in typical drama or comedy - which is one of the reasons you become an actor, is to do as many different things as you can, and live as many different lives as you can. And it's fun to do a role where you can really kind of suspend reality a bit. It's a good time."

The sudden appearance of Ryan's character, Amanda, is a shock to Pete (Eddie McClintock), and a bombshell to his warehouse colleagues.

"She's a Marine. She is Eddie's ex-wife, which is a bit of a surprise to everyone else at the warehouse. And she is getting remarried and things sort of take a bit of a turn - without giving away too much of the story. And she sort of needs Eddie's help to get out of a bit of a problem," Ryan says.

She took this role because it allowed her to simultaneously work and vacation with her family.

"It just seemed like a lot of fun," Ryan says. "And the showrunner is a friend of a friend and he's a great guy. And the offer came up and it seemed like an interesting role and an interesting storyline, and it looked like a lot of fun to do. And it was, I had a ball. And my husband and my daughter came up with me, and so we had a good time - a little family getaway."

Ryan says she enjoyed working with the "Warehouse 13" cast - especially the affable McClintock, whom she met for the first time.

"I mean everybody's great, but he was really a pleasant surprise, because he's just so much fun in real life. He's just a great guy," she says.

While Amanda and Pete bicker on screen, Ryan says, "Eddie and I had a ball working together."