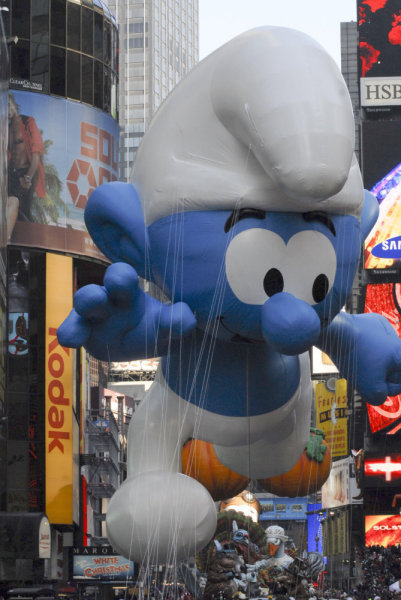 A Smurf from the Macy's Thanksgiving Day Parade. (NBC photo by Ali Goldstein)

NBCUniversal has joined forces with Columbia Pictures and Sony Pictures Animation to encourage viewers to go "Channel Smurfing" with a multiplatform advertising campaign spanning nine NBCUniversal properties promoting "The Smurfs," the hybrid live-action/computer-animated family comedy coming to theaters July 29. Produced by NBCUniversal in close collaboration with the studio and filmmakers, which created custom animation for the project, the on-air and digital campaign combines in-show integrations, custom promos, digital extensions and sneak peeks at the film.

The two-week campaign kicked off July 18 with a special 30-second spot featuring the Smurfs taking over an NBCUniversal control room. The pieces were specific to the channel on which they aired and encouraged viewers to tune in for custom channel spots and never-before-seen clips of "The Smurfs." Participating networks include NBC, Bravo, Oxygen, USA, Syfy, The Weather Channel, E!, NBC-owned television stations and the Telemundo local television stations, as well as the various channels' digital properties.

Commenting on the announcement, Stefanie Napoli, executive vice president of media for Sony Pictures, said, "NBCUniversal has been a wonderful partner as the networks, the studio and the filmmakers came together to create an innovative, funny and attention-grabbing integrated campaign that truly captures the creativity, humor and tone of this family-friendly film. It's also fitting that this promotion is with NBCUniversal, as NBC was the network that first introduced 'The Smurfs' to a wide audience in America."

The custom spots and show integrations included a visit by the Smurfs to NBC's "America's Got Talent," where the Smurfs interacted with the show's judges; a vignette featuring Bravo's "Real Housewives of New Jersey" revealing which Smurf they most identify with; a Smurfs "Character Countdown" on USA, with in-depth profiles of some of the Smurf characters; a special "Imagination Transformation" on Syfy that brings the Smurfs to life in the vast Syfy white space, and custom spots on The Weather Channel.

"We're excited to partner with Columbia Pictures and Sony Pictures Animation on this effort that not only showcases the extensive promotional power of our portfolio, but also highlights the type of creative campaign we can achieve when we partner with our clients to both entertain and engage consumers. This was a great collaboration, and it was fun too!" said Barbara Blangiardi, senior vice president of creative partnerships and innovation for NBCUniversal.

In addition to the on-air spots, the various channels' websites are featuring special online quizzes and extensions that promote the movie and drive show tune in. Six different digital sites - www.nbc.com, www.bravotv.com, www.oxygen.com, www.syfy.com,www.usanetwork.com and www.accesshollywood.com - will also feature two main "Blue Outs," turning blue in anticipation of the debut of the movie.

The Smurfs make their first 3D trip to the big screen in Columbia Pictures/Sony Pictures Animation's hybrid live-action and animated family comedy, "The Smurfs." When the evil wizard Gargamel chases the Smurfs out of their village, through a magical portal, and into our world, they land in the middle of New York's Central Park. Just three apples high and stuck in the Big Apple, the Smurfs must find a way to get back to their village before Gargamel tracks them down.

The film is directed by Raja Gosnell. The producer is Jordan Kerner. The screenplay is by J. David Stem and David N. Weiss and Jay Scherick and David Ronn from a story by Stem and Weiss, and based on the characters and works of Peyo.

The story of the Smurfs - a property created by Peyo - started in 1958 with the creation of comic books, which were later brought to both the big and small screen. Over the years, the little blue characters haven't just limited themselves to the page and the screen. They have inspired records and CDs that have sold millions of copies, entire collections of figurines and toys, and many more products. In all, more than 3,000 derived products have been produced, and leading brands and companies have spread their messages worldwide with the help of the Smurfs. A multitude of new projects appear regularly, thus making the success of the Smurfs planetary.