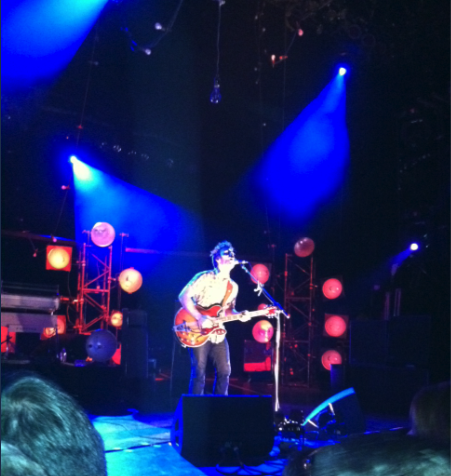 The Black Keys impress at Artpark

Last Wednesday evening, The Black Keys jammed to a packed, sold-out house and lawn at Artpark. If you were lucky enough to be in attendance, then you know you were seeing one of the hottest young bands in the U.S. right now. The rock-blues duo of singer/guitarist Dan Auerbach and drummer Pat Carney cranked out tune after tune of sweat-fueled hits. They worked hard for their money on this night, and the fortunate audience soaked it all up and wanted more.

Hailing from Akron, Ohio, The Black Keys have a huge Canadian following, and their northern fans are credited with sending their last album, "Brothers," platinum. They are still riding high from their triple Grammy coup in February, and getting tons of exposure via numerous commercials (who could forget the Molson M commercial?), and TV and film soundtracks.

The excitement in the air was palpable, as they slammed out the guitar riffs and familiar lyrics to a hungry audience. They started off with "Thickfreakness," and played all of their hits to the delight of fans.  They brought out a keyboard player and a bass player to the mix for the last half of their show, which ramped it up a notch.

One and all in the audience knew they were witnessing history in Lewiston, as they bolted out "Tighten Up," their biggest hit. As soon as fans heard the first few notes whistled by Auerbach, they went nuts and started screaming and singing along.

"Howlin' for You," another big hit, was pretty much live music perfection, and the band seemed to relish in playing every bit as much as the audience loved hearing it. The Keys left them begging for more, and did not disappoint with a smashing encore.

The level of energy and mojo this duo delivers to each and every song is remarkable. If you can catch The Black Keys on any of their four remaining concert gigs this summer (check www.pollstar.com), I highly recommend that you do. You will be witnessing rock magic, and probably seeing a band this hot up close and personal for the last time before they are playing huge, generic venues.