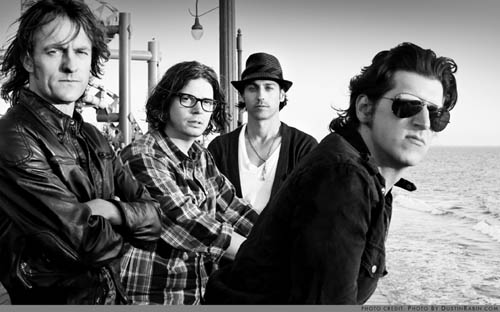 Oh, this just keeps getting better!

If the Niagara Falls Hard Rock Café simply offered a free concert with Our Lady Peace - no more, no less - that would've been more than enough to bring me and about 15,000 other people downtown this Saturday night. But, no, the venue didn't stop with one of Western New York's favorite bands. It added Son of the Sun and Klear, promised fireworks, and then went and topped that musical sundae with a DMC (as in, Run DMC) cherry on top.

And now, as if we're not already in a sugary, alt-rock state of euphoria, OLP frontman Raine Maida is promising new songs.

I think we need to sit down for a minute.

If your inner music man is jumping up and down with delight (mine is), it's for good reason. OLP has been holed up on the West Coast working on a new studio release. The Toronto-birthed band is itching to get out and perform, and Niagara Falls is the first tour stop.

"Right now, we're just finishing some songs in L.A. on a new record," Maida said Thursday. "We're going to rehearse tonight and tomorrow before we leave on the red eye and play Saturday night. We're going to rehearse the new songs so we can play them. It'll be the first exposure, which is, you know, kind of fitting, because we have such a connection with (the) Buffalo (area).

"It's the first time people are going to hear new songs live. It's a cool thing."

From the sound of Maida's voice, it sounds as if his inner music man is jumping up and down, too.

"The state of the band right now, we're in such a great place, and we're so excited to get out there and play some of the new songs," he said. "We've been in the studio now for a while. So, just the fact that we get to go play live, it's all kind of coming to a big moment for us. And this is really the first show for us this summer. We're doing a bunch of festivals, but this is the first one.

"We've taken a lot of time with our lighting rig and the video screens that we have. I think we're just trying to keep upping our game."

Each year, the region's outdoor music venues compete for an OLP show date. This year, it was the Hard Rock Café that won a coveted performance.

"We've done the Lockport thing twice now. It just felt like doing ... something in the city," Maida said. "Any time you do something in a city, I'm curious to see how well it will hold up to those Lockport shows."

When OLP performed in 2009 at the Molson Canal Concert Series, Maida was visibly shocked when he walked out on stage and saw a sea of fans in the Ulrich City Courtyard lot in Lockport.

"It's just one of those things," he said. "We did a sound check and it just felt like a big parking lot. And then we went out to dinner, and it seemed like people were coming and it was gonna be cool. And then we got back from dinner, and, 'Oh, my God, there's, like, 25,000 people here!'

"It was an amazing night. It was beautiful. ... It was a really incredible, special evening. It's something we're all going to remember fondly."

Regardless of where OLP performs in Western New York, Maida said fan support has "always been very, very strong. It's a great place for us to go play live - just the energy from the crowd; just that connection."

Now, about that new OLP material. Maida said the next album is "coming along really well."

"We're just approaching this record very, very differently," he said. "It's just trying to be brave. It's all about trying to be a bit more musically ambitious. I think we're finally there as musicians. Just the headspace we're at. We're really able to kind of dig into that side of our musicality. So it's pretty exciting."

"We're eight songs in," Maida added. "One of the songs that we're talking about leading off with ... we're, like, literally working on it right now, and it's close to being done."

"The songs are so unique, and I think we'll surprise people," Maida said.

Hard Rock Café "Saturday at the Falls" begins at 6 p.m. on July 2 on Old Falls Street. The concert features Son of the Sun, Klear, Agent ME, Darryl "DMC" McDaniels and Our Lady Peace. For more information, or for VIP tickets, call 282-0007 or visit www.hardrock.com/niagarafalls.

Our Lady Peace hit songs include: "Starseed," "Clumsy," "Superman's Dead," "One Man Army," "Is Anybody Home?," "Innocent," "Somewhere Out There," "All You Did Was Save My Life" and "The End is Where We Begin."