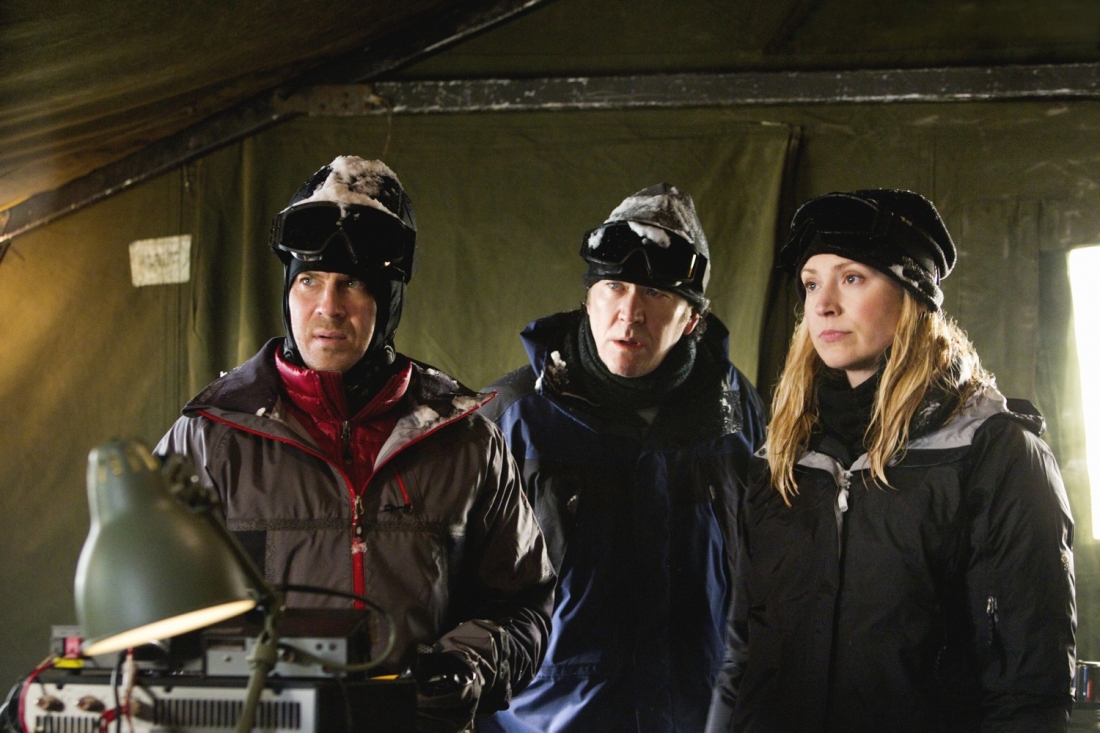 Change is in the air on 'Leverage'

"Last night I was on a rooftop in the middle of downtown Portland in a cocktail dress, which you don't do everyday," Beth Riesgraf says.

By now, fans of TNT's hit series "Leverage" are used to seeing Riesgraf's character, charmingly aloof master thief Parker, in such unusual situations. It's a safe bet the character will run, jump or repel off the building with something she's robbed from the rich to give to the poor.

Such a feat may not be an everyday occurrence for the actress, but it's something we're used to seeing from Parker. What we haven't seen, however, is a lot of emotional expression from the supergirl with a comic touch and no first name (or is she sans last name?).

All that will change in the fourth season premiere (Sunday, June 26, 9 p.m.) When Nate Ford (Timothy Hutton) and his team of grifters, hitters, hackers and thieves are called upon to find a woman's missing husband in the snow-covered Alaskan mountains, Parker finds herself in a situation where she begins to question who she is, and if she wants to remain unattached.

"It was pretty awesome," Riesgraf says. "I definitely wasn't expecting the first episode in to be as heavy emotionally as it was for Parker, not for any particular reason, I guess. I just thought, 'First episode back; we're going to gear up and get into some stuff.' But they just really started it off with a bang."

When Parker and Eliot (Christian Kane) are trapped below the surface, the girl who can escape from anything suddenly finds herself at a loss for a way out of her unexpected emotional distress.

"I think any actor loves it when they can challenge themselves and be fortunate enough to have material that does that," Riesgraf says.

The episode was a chance for the actress to bond with her co-star.

"I loved it," Riesgraf says. "I mean, it was a challenge in terms of how fast we shoot and how we shoot out of sequence and out of order and all that stuff, but Christian and I got to do something really great - that we haven't had the chance to do before. We've never had an emotional scene like that together. It did a lot for us as actors, and for the characters, because it really showed this bonding on another level, and it showed them connecting in ways that they haven't been able to so far. I felt like it set a really good precedent for the rest of the season, because it's sort of like, 'Whoa, OK, we're no longer just gonna' ... not that we ever slowly ramped into it ... but we're gonna just start it off like, 'Yup, this is where we're at, and now we're going to go from here.' "

"For me, it was really exciting to be thrown into that right off the bat, and have some place to go emotionally and sort of set the tone for the season - that there's going to be some shifts with (my character)," Riesgraf says.

As Parker continues to overcome her emotional detachment, she begins to grow closer to Hardison (Aldis Hodge), who has subtly wooed her from afar.

"There's anticipation on the whole Hardison and Parker theme - from fans, especially," Riesgraf says "And I think the writers are aware that is was time to start paying that off a bit. You'll certainly see growth.

"In a way, we've all talked about how we're this family unit - this dysfunctional family unit - but this season I feel like we're now focusing more on putting ourselves on the line for each other and in ways that we were never really willing to before. You know, it was about being a part of a team - and it still is. But now I think, individually, we're willing to go out on the line for another and in other ways and the trust has sort of really grown. And I think it's mostly about that for Parker and Hardison this year. It's about growing together and trusting, and knowing that the other one has their back.

"That's been really fun so far."

Though Riesgraf acknowledges fans are eager (curious?) to see Parker and Hardison bond, she cautions too much too soon might backfire on all parties.

"I was talking to (Exec. Producer) Chris Downey two days ago about it, and I just said, you know, 'For me, playing Parker, there's something really interesting about them never ending up together, like, in terms of "Now they're a couple and now they're fully together on the show," ' " she says. "To me, it's sort of like, OK, well once that's done, where do we go from there? What's the plan? It's talking about different scenarios and what audiences like versus, maybe, what the people playing the characters like. We like more obstacles and boundary issues and barriers to play. Because I think the second that those go away, people will get complacent. People will sort of be like, 'Oh, OK.'

"But, I think the way that we've played it so far has been really smart, because we haven't blown it. We've haven't gotten them together too soon. But I think it is that fine line where now we do have to start paying the relationship off, otherwise people will really start to get bored of that, too."

"I was pleasantly surprised this season, because we're getting closer, in terms of Parker and Hardison, but maybe not in the ways that people expected," Riesgraf says. "But I think it's definitely going to pay off for those viewers that care about it. It's going to be satisfying."