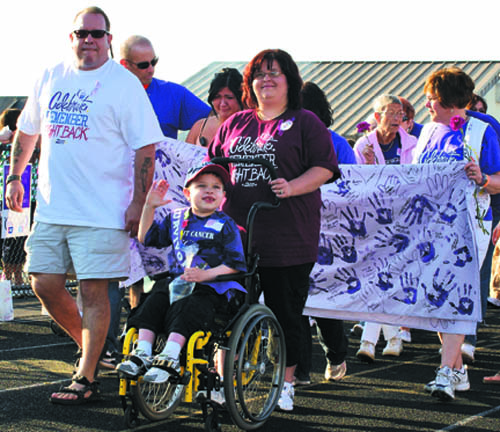 Ian Cameron, the 2011 honorary survivor for the Grand Island Relay For Life, waves to the crowd during the survivors lap during the event on June 3. He is made the lap with his parents, Dona and Robert Cameron.

In Easter week of 2005, Dona Cameron found her 10-month-old son Ian in his crib paralyzed from the waist down by a lemon-sized mass near his spinal cord. Dona learned quickly that money raised for the American Cancer Society funded research that would provide doctors with the medicine used to treat her son's tumor, called a neuroblastoma.

She spoke at June 3's Grand Island Relay For Life on behalf of her son, the event's honorary survivor, to praise those who take part in the annual ACS fundraiser.

"Thank you for raising money, because money goes to research for doctors to be able to treat everyone," Dona said during the Relay opening ceremony. "And because someone, before Ian got sick, raised money, those doctors knew the medication to give Ian. That's why Ian's here."

Mary Dunbar-Daluisio, co-chair of the Grand Island Relay For Life, said this year's event has raised $109,964.40 so far, with the big Father's Day Lawn Mower Race fundraiser yet to take place. Fundraising continues to Aug. 31. Jane Dent, the GI Relay's staff partner from the American Cancer Society, said that over the previous eight years of the Grand Island Relay For Life's existence, the event has raised $819,000.

"Grand Island is like a lighthouse surrounded by water. It is a beacon that is well lit with hope of a secure place to be," Dunbar-Daluisio said.

Relay participants walk the track to raise money, and Ian is ready to join them, defying all odds, his mother explained. After chemotherapy and five surgeries to relieve pressure on his spine within six months of his initial diagnosis, Ian has regained some function, proving doctors' early predictions wrong.

"They told us he wouldn't sit up or walk," Dona said to scores of Relayers. "Well, guess what? Ian's been cancer-free since September of 2005. And you can see Ian's sitting, and he is crawling, and even later tonight you're going to see Ian probably walking with his braces and a walker."