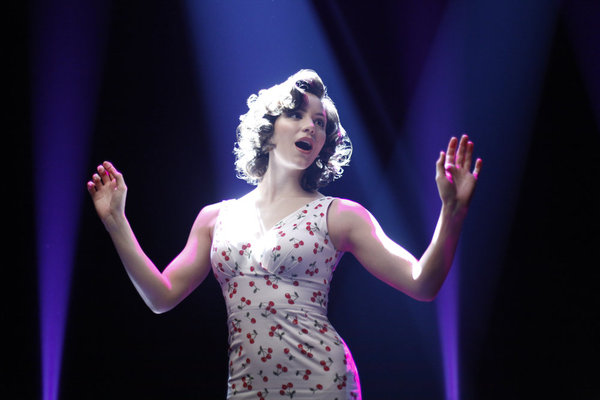 Pictured from "Smash" is Katharine McPhee as Karen. (Photo by Will Hart/NBC)

The arrangement guarantees worldwide, digital and physical rights to the first season of "Smash" with successive options to subsequent seasons.

"A musical series should naturally be accompanied by a soundtrack deal, and NBC is very excited to be working with the best. Our Columbia Records partners will guide the soundtrack of 'Smash' into a big component of the show's success," said Greenblatt. "The music will be a driving force of what promises to make a tremendous impact for NBC in January and we couldn't have asked for better expertise and strategy than this company will provide."

"We are thrilled and proud to be chosen by NBC to work on their amazing new show," said Rob Stringer, chairman, Columbia/Epic Label Group. "Music is at the heart of 'Smash,' and with our wonderfully creative broadcast partners, we will develop innovative strategies to present this music to a huge audience."

"Smash" is a musical drama that celebrates the beauty and heartbreak of the Broadway theater as it follows a cross-section of dreamers and schemers who all have one common desire -- to be a "Smash." The soundtrack will be both original compositions by Marc Shaiman and Scott Wittman, the Tony and Grammy Award-winning songwriters of Broadway blockbusters such as "Hairspray" and "Catch Me If You Can," as well as covers of a variety of existing hits that will combine to tell the narrative of this musical series.

McPhee's career launched with her renowned run on "American Idol" in 2006 in which she was the runner-up on the fifth season. Her self-titled debut album "Katharine McPhee" was released in January 2007 and premiered at the No. 2 spot on the Billboard 200. The first single from the album, "Over It," was a Pop Top 30 hit and was certified gold in 2008.

"Unbroken," McPhee's second album, was released in January 2010 and debuted at No. 27 on the Billboard 200. The album included the single "Had It All," which crested at No. 22 on the Billboard Adult Contemporary chart. McPhee has already had success with Christmas releases from her 2007 single "O Come All Ye Faithful" and "I'll Be Home for Christmas" in 2009.

In addition, she has appeared frequently on television around the holidays, including a guest appearance on the annual "Christmas in Washington" television special as she performed for the First Family, and the "My Christmas" concert starring Andrea Bocelli. Last year, the sensational singer released some of her favorite Christmas songs for her third album, "Christmas Is the Time...To Say I Love You." The single "I'll Be Home for Christmas" was a huge hit, and was downloaded more than 500,000 times exclusively on iTunes. McPhee also has co-starred in the feature film "The House Bunny" and has guest-starred in NBC's "Community" and "CSI: New York." She co-stars in the upcoming films "Shark Night 3D" and "Peace, Love and Misunderstanding" with Jane Fonda.

"Smash" centers on a desire to create a Broadway musical based on the life of Marilyn Monroe -- written by the successful songwriting duo of Tom (Tony Award nominee Christian Borle, "Legally Blonde: The Musical") and Julia (Emmy Award winner Messing).

Julia recently began the process of adopting a child with her husband of many years, but her focus is torn when she has the opportunity to write another Broadway hit. A rivalry soon forms for the lead role between a youthful, inexperienced Midwestern beauty (McPhee) -- who is trying to find fame in the big city against all odds -- and a stage veteran (Megan Hilty, "9 to 5: The Musical"), who's determined to leave the chorus line and finally get her big break. A tenacious producer, Eileen (Huston), discovers the "Marilyn" project and jumps on board with a brilliant director (Jack Davenport, "Pirates of the Caribbean" films) -- whose talent is matched by his cunning and egocentric amorality. The series stemmed from an idea of executive producer and multiple Emmy and Oscar winner Steven Spielberg ("ER," "Schindler's List").