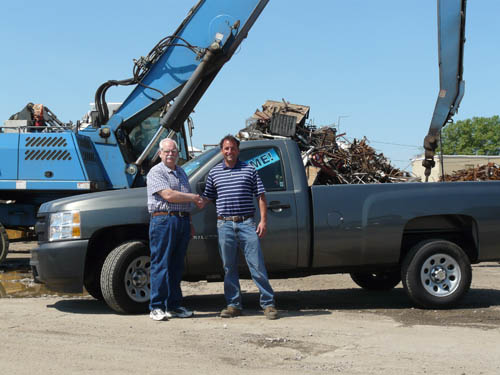 Niagara Metals served more than 400 free breakfasts, raffled off $1,500 in cash, and awarded a grand prize of a 2011 Chevy Silverado 1500 Truck to Robert W. Federspiel of Niagara Falls during the grand finale of its "Customer and Community Appreciation Days" on Saturday, June 4.

Federspiel may have his wife to thank for his good fortune. The 75-year-old retiree had been cleaning out his basement after constant requests from his wife, and had visited Niagara Metals' yard three times during the five-month-long promotion, earning a chance to win each time he sold scrap. Federspiel's entries were among approximately 17,000 that were in the drawing.

The win was also an extended family affair. Federspiel's son, Robert L., who was present at the drawing, immediately called his disbelieving dad to tell him about his good luck - and his new truck.

When Federspiel senior picked up the vehicle on Monday June 6, he said, "My wife and I are really excited. The whole promotion was a great way for Niagara Metals to show how much it values its customers."

Niagara Metals launched this first-ever "Customer and Community Appreciation Days" in January as a way to show its appreciation to both its customers and the community. Customers had a chance to win dozens of weekly and monthly prizes when they sold scrap metal at published scale prices. The community benefited from the company's donations of $5,000 each to three local charities: Mercy Flight; Heart, Love and Soul Inc. Food Pantry and Dining Room; and Family and Children's Service of Niagara.

"We were very pleased with the response to 'Customer and Community Appreciation Days,' " said Niagara Metals president, Todd Levin. "We've never done something like this before, and to get 17,000 entries for the grand prize and to have such a huge turn-out for the grand finale was really a kick for everybody on our team."