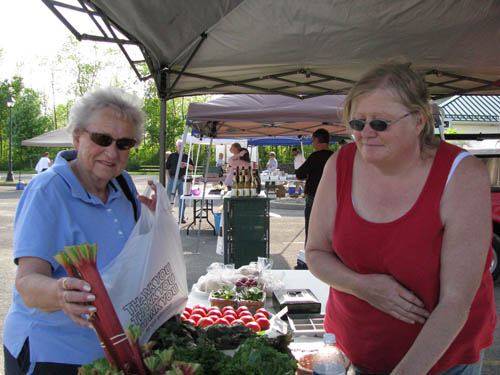 Some are actual farmers. Some are not. But you can expect to find the fresh, natural and unusual at the Wheatfield Farmers Market.

After a short, experimental season last fall, the new outdoor market in the Wheatfield Town Hall parking lot opened for its first full season on Wednesday, May 25. The market will be open Wednesdays through Oct. 26. Currently, hours are from 3 to 7 p.m.

On opening day, 10 vendors set up shop for a small but steady crowd of shoppers. More vendors have signed up to bring their wares as the season progresses, according to Kathy Harrington, town clerk.

Both vendors and their customers were excited about the market.

Wheatfield resident Nancy Mihalko stopped for some fresh rhubarb she planned to make into sauce at the Prudom Farms of Middleport stand, which also featured snow and snap peas, radishes, parsnips, green onions and hydroponics-grown tomatoes.

"I was going to the Wheatfield Garden Club meeting, so I just came early," she said, adding that she definitely would be back. "It's a good thing; it's nice and close and there's good parking."

Farm owner Stacy McAvoy said she would be adding strawberries to her offerings in a couple more weeks. Strawberries are going to be late this year because of all the rain, she said.

"It's nice to have a small community market," she said of Wheatfield's new project. "It has the potential to be a really great market here. The town has definitely supported it, which makes it all the better."

Customers at Geri Hens' stand, who have purchased her honey at other markets and fairs in the county, agreed that her USDA-certified organic honey far outmatches anything that can be found in a supermarket. She offers 16 different varieties. Hens Honey Bee Farm is located in Pendleton, but she has bees in 11 counties.

Hens plans to be a regular at the Wheatfield market, but the busy beekeeper and Cornell Cooperative Extension bee specialist warns that sometimes she might be called away; she also removes swarms of insects for those not as fond of them as she is - "I'm flitting around chasing bees and wasps and hornets while other people are getting the Raid out."

Another farm product at the market is natural beef, pasture-raised with no antibiotics or hormones, from Librock Farm in Gasport.

Some Wheatfield small businesses also are part of the market.

Russ Zettle, owner of New Day Coffee at 3046 Niagara Falls Blvd., was one of the original vendors last year. He offers single-origin coffee, blends and decaffeinated coffee, as well an assortment of flavored coffees - Bananas Foster coffee, anyone?

Another Wheatfield business, Tina's Cheese, was represented by Tina's son Dave Kislack, who was busy slicing cheese and making recommendations to customers.

Harrington said several customers had asked for Wheatfield resident Shirlene Hicks-Mullen and her sweet potato pies. The Sweet Potato Pie Queen, who was part of the fall market, was unable to be part of the opening, but is expected to be selling her specialty pies at future markets.

All the vendors happily chat with customers and talk about their products, so be sure to allow extra time for this homey pastime.

Gordon Munro of Bonard's was selling Applewood Hollow blended cocoas. He's a Lockport resident, but the business is in Buffalo, located in the first Kraft Foods factory in the U.S. on Manitoba Street. He offered a taste of cocoa and shared the information that orange chocolate is his biggest seller, but the newest flavor is coconut - "It's like eating a Mounds bar."

First-time vendor Ted Wirth of Shirley's Country Crafts in Lewiston was selling birdhouses and solar lights. He'd paid the one-day $5 fee for a spot in the market, but was so pleased with the atmosphere there that before the day was over, he'd paid $84 for the entire 21-week season.

Judy Ponzi, a member of the Farmers Market Committee along with Harrington, Ken and Diane Retzlaff, Karen Frieder, Bob O'Toole, Nancy Rosie and Agnes Ryan, said vendors must be approved by the committee. Initially, the committee looked at limiting the market to just farmers, but decided to allow high-quality food and garden crafts. They are hoping to avoid a flea market atmosphere, she said, so they ask that products be homegrown, homemade or handmade.

Committee members are excited about the success of the market thus far.

"Things have been so negative for a long time in Wheatfield. We're trying to do something positive," Ponzi said.