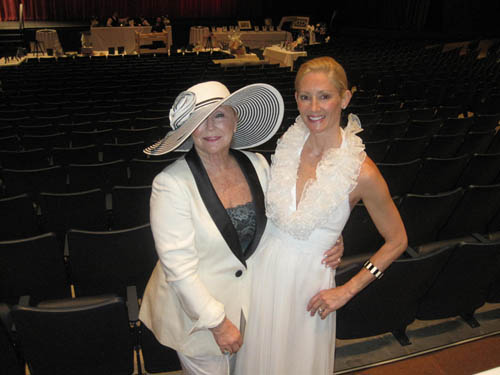 Cheers to 37 magical years at Artpark

Artpark & Co.'s "Black & White Ball" was held on stage on Saturday, May 21, and celebrated the venue's 37th anniversary.

More than 200 Artpark patrons enjoyed the music of the Jamie Holka Trio during cocktail hour while bidding on luxurious silent auction items. George Osborne, president of Artpark, and Sophia Smith, the "Black & White Ball" chairwoman, called the guests to dinner. Everyone was dazzled when the curtains were opened to unveil a glamorous stage dressed in black and white lanterns, with lily and hydrangea towers on each table.

Mary Alice Demler of WGRZ Channel 2 was the emcee for the event, while Ambassador Anthony H. Gioia was honorary chairman. Christopher Brown, chairman of the Artpark & Co. board of directors, welcomed the Artpark supporters to the event, and thanked them for their involvement. Gioia regaled the crowd with stories of being the ambassador to Malta during the Sept. 11th attacks, and his work with the U.N.

Smith thanked her committee, and all those who contributed to making the evening a dazzling success. Rose Gellman, who has been on the board of directors since Artpark opened in 1974 (and involved in nearly every fundraiser there since), was the last speaker.

The evening was a success - even the weather cooperated, which hasn't been an easy feat as of late. Artpark looks forward to many more anniversary celebrations to come in the future.

Artpark celebrated its 37th anniversary last Saturday, May 21, with a black-tie ball on stage, aptly titled the "Black & White Ball." I would like to thank so many tireless volunteers and local businesses for their help and effort.

My amazing "Black & White Ball" committee has been working diligently for many months on the silent auction, decorations, flowers, music and menu. I would like to thank Rose Gellman, my co-chair, and a WNY fundraising legend; Laurie Lisowski Frey, who oversaw the silent auction; Kirsten Lawley, co-chair; Erin Harris, who designed the invitation and program; Fay Northrop, who assisted with the silent auction; and Bob Bloom and Jane Mogavero.

Mary Alice Demler was our emcee, and did a perfect job; the evening was truly made more special by her presence. Susan Geissler (the Freedom Crossing monument artist) donated her life-size sculptures to our display, which dazzled every guest. A-1 Landcare of Lewiston provided all the gorgeous flowers and trees that greeted Artpark patrons upon their arrival.

Wow. We are so thankful for your contributions, which made our fundraising a success!

I am so grateful for everyone's assistance and enthusiasm, which made the "Black & White Ball" an enormous achievement for Artpark, and all of its patrons in Lewiston and beyond. We look forward to many more anniversary celebrations in the future!

Cheers to 37 magical years of Artpark!

Artpark Board of Directors