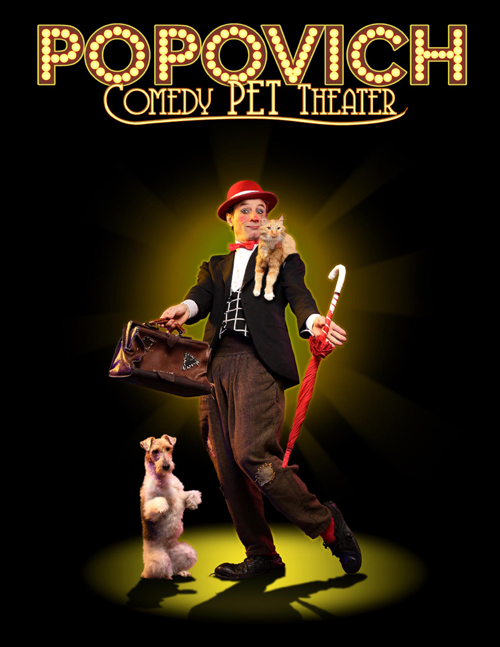 From flaming lips to laser lights, tower-climbing rockers to Elvis impersonators, Artpark has offered a vast assortment of entertainment options in recent years. But the Lewiston performing arts venue has never had a cat on its hind legs pushing a dog across the stage in a stroller.

The show began with a laugh-out-loud slide show of animals in precarious and adorable situations and settings. It segued into a dog at a microphone introducing the program and a skit with Popovich leading a collection of dogs, cats, rats and birds into train cars.

How this big top ringleader trained cats to cross the stage and enter specific train cars is beyond me. But that was just the tip of the iceberg. Popovich also had his flock of felines climb poles, walk tightropes, roll over and, yes, push a dog from stage left to stage right.

Oh, and if that wasn't enough, Popovich himself entertained the audience of about 1,000 with baton twirling, block stacking and juggling atop a tall ladder, all to a musical backdrop that sounded as if it was from "Tetris."

Popovich's crew of three guys and a girl also performed tricks and helped with the animals - though the pets seemed very self-sufficient, even going so far as to clean up after themselves after each maneuver.

The kid-portioned performance (it only lasted one hour) ended with Popovich informing the audience that the pets were all orphans whom he rescued and rehabilitated. He encouraged the crowd to visit his website to learn ways in which to train four-legged friends.

Parents and children seemed to enjoy the performance, as laughter and "oohs" and "aahs" filled the Mainstage Theatre. The Popovich play was a fun way to kickoff the end of the school year.