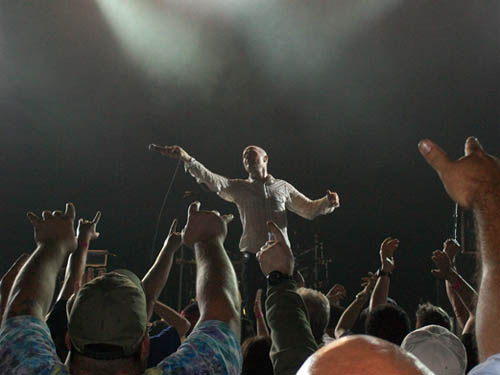 Gord Downie of The Tragically Hip.

Buffalo readies for 'Thursday at the Rectangle'

"Thursday at the Square" is relocating

With its top concert acts already announced (and tickets on sale), the biggest news offered up by Buffalo Place executives Thursday was the relocating of its signature event. "Thursday at the Square" is moving from Lafayette Square to the Erie Canal Harbor Central Wharf at the end of June.

"On June the 30th, we're moving 'Thursdays' to the waterfront," said Buffalo Place President and board Vice Chairman Anthony J. Colucci III at the summer concert series kickoff press conference. "We're going to do six consecutive Thursday nights at the waterfront," which he jokingly called "Thursday at the Rectangle."

Buffalo Place exists to promote downtown Buffalo and, in that capacity, Colucci said the consensus among local business owners was that the waterfront move is "a great idea."

Tickets recently went on sale for Buffalo Place's "Rocks the Harbor," which also takes place at the wharf. The concert series features six weekend shows, led by Elvis Costello & The Imposters on June 25, The Tragically Hip on July 30, and Alice Cooper on Aug. 26.

"Thursday at the Square's" 25th anniversary season lineup features 26 national acts, including: Morris Day and the Time on June 9; Blues Traveler on June 16; Grace Potter & The Nocturnals on June 23; Lowest of the Low on June 30; Sloan on July 7; two-thirds of the Dixie Chicks, sisters Martie Maguire and Emily Robinson bring their side project, Court Yard Hounds, to Buffalo on July 14; and Tokyo Police Club closes the series on Aug. 4.

For 2011, Buffalo Place opted to reunite with local booking agency Funtime Presents. Colucci said his company did an extensive analysis of its in-house concert promotions, and decided this is "precisely where we want to move."

He said Funtime principals Artie Kwitchoff and Donny Kutzbach, who also book the Town Ballroom and events at Artpark, bring a considerable contact list, extensive market knowledge, and "frankly, they had a lot of great ideas."

"This seemed like a good alternative. ... I'm happy with what they've done," Colucci said.

"It's a strong schedule in lots of different ways," he added.

"Thursday at the Square"

All concerts are free and run from 5 until 9 p.m.

All concerts are ticketed and run from 6 until 11 p.m.