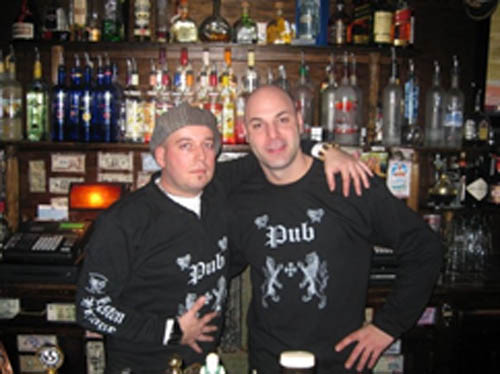 The Niagara River Region Chamber of Commerce will honor nine businesses and individuals at its annual Chamber Awards Gala, beginning at 5:30 p.m. Saturday, June 4, at the Niagara Falls Country Club in Lewiston. The evening is one of the chamber highlights of the year. It's held to celebrate the business community and those citizens who help contribute to the success of the region.

Scibetta and Webster first opened the doors to the Village Pub on Jan. 19, 2008. After looking at possible locations in Buffalo, Clarence and Williamsville, they decided on the Village of Lewiston because they always loved the feel of Lewiston's small, close-knit community. They knew this was the place where they could maintain the long-lasting friendships they had made while working there in the years prior.

Providing great service was also a priority, and knowing they had the start of a great staff from developing those friendships, they knew they had something great. Perhaps that is what makes "The Pub," as it is often referred to, quickly rise as the place to be among the area's many dining establishments as "everyone's favorite neighborhood bar." Scibetta and Webster make it a point to personally know each and every guest that walks through their doors.

The road to success was not an easy one. Scibetta and Webster heard the location they had chosen did not have good luck in the past. Hoping for the best, they went ahead with their plans, spending every penny they had and even money they didn't. They did all of the construction themselves including the painting, plumbing and electrical work. Money was so short that upon nearing completion of the building, they had to scrape together change for food knowing that their only option was to succeed.

When the Pub first opened, Scibetta and Webster were not only the co-owners, but were also the sole employees. They made it their mission to hire some of the most talented bar and service staff that Niagara County had to offer, a staff that would live up to the Pub's reputation for uniquely personal service. The Pub currently staffs 14 employees, including its talented chef Matt Robare. Robare has worked at several prominent Western New York eateries, including the Buffalo Chophouse and JP Bullfeathers. He brought his expertise to the Pub in March of 2011 and prides himself on keeping the menu interesting.

As a new business, Scibetta and Webster initially focused on the bar area and gradually towards their food menu, which became so popular that more tables had to be added to accommodate the customers. They have recently expanded by adding the Parkview room which seats 80, complete with a fireplace, mahogany and stone walls, candles throughout and light jazz playing in the background, while keeping the original feel of an English Pub. The game lounge offers numerous TVs, a pool table and dartboards.

The Pub also continues to expand and update its beer list and now currently boasts one of the largest draft and bottle selections in WNY. Its current offerings consist of some familiar favorites, of course with the Pub's own spin. The food menu offers everything from Asian fare to fried gator, creative burger combinations, chicken wings, and an annual summer-long Lobsterfest featuring fresh, live lobsters flown in from Maine for $10.

Along with its exceptional food and service, the Lewiston Village Pub & Restaurant and its owners are also well known for their heavy involvement in charity and fundraising events in the Lower Niagara Region. The Pub's most notably charity event is Pubfest, a charity event that benefits the Variety Kids Telethon of Buffalo and WNY. Founded by Scibetta in 2009, the three-day festival has raised more than $23,000 in its first two years with hopes to double that amount this year. You might often see Scibetta at the Lewiston Smelt Festival as the "Smelt King," and he also serves as second vice chair on the executive board for the Niagara River Region Chamber of Commerce, a member of the Lewiston Advisory committee, Lewiston Kiwanis and a board member on the Variety Kids Telethon. The Pub is also actively involved in sponsoring numerous events at schools including Lewiston-Porter, St. Peter's R.C. School, Niagara University as well as local hockey and softball teams. The Pub also actively participates in every Lower Niagara River Region festival and is always willing to help out in any way.

The Pub also has hosted many fundraisers and benefits like the recent Dog Whisperer dinner for Lewiston's dog park, "Rock Out for Ryan" and the upcoming "Burglar Bash." The Pub's parties are some of the most unique and entertaining events of the year.

The Pub's annual Cinco de Mayo party took place Thursday and featured a straw-covered floor and pictures with live donkeys. The proceeds benefited the Niagara County SPCA. Its St. Patrick's Day party is the biggest party of the year, with doors opening at 8 a.m. to offer culinary delights such as Lucky Charms and Guinness and corned beef and hash.

Scibetta and Webster promise that their business is going to continue to grow and evolve. Plans for the future include making improvements and changes to facilitate their ever-increasing business. They would like to eventually buy the building they are leasing and are also looking to open another location. The Lewiston Village Pub & Restaurant is open seven days a week at 840 Center St., right in the heart of historic Lewiston. Hours are Monday through Thursday, 3 p.m. to 2 a.m.; Friday, 11 a.m. to 3 a.m.; Saturday, noon to 3 a.m.; and Sunday, noon to 2 a.m.

The Lewiston Advisory Committee and the Niagara River Region Chamber of Commerce proudly congratulate The Lewiston Village Pub & Restaurant as the 2011 Lewiston Business of the Year.