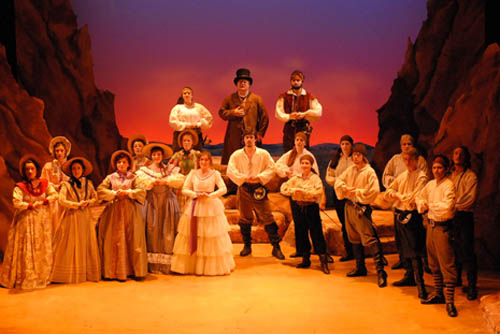 The cast of "The Pirates of Penzance," which is on stage this weekend in the Elizabeth Ann Clune Center for Theatre on the Niagara University campus.

It's not often that a critic will admit this, but my opinion meant precious little Sunday when watching "The Pirates of Penzance" at Niagara University. Whether I loved it, or loathed the day I agreed to review it, one thing was clear: the audience deemed it m-arrr-velous.

From curtain up to curtain down, a wave of laughter echoed across The William P. and Marie Leary Theatre. As one patron put it, "Pirates" was "funny as hell."

Personally, I liked NU's take on the Gilbert and Sullivan comic opera. It was better than last year's way-too-frothy "Anything Goes," but it lacked the gravitas of previous season-enders "The Threepenny Opera," "Cabaret" and "Chicago."

"The Pirates of Penzance" tells the story of Frederic (Alan Trinca), a 20-year-old cast into a life of plank-walkery by his nursemaid, who misunderstood a family directive to land the lad an apprenticeship as a "pilot." On Frederic's 21st birthday, he is freed from his contractual obligations and, quite out of the blue, decides to become a pirate-buster. Moreover, he's desperate to look upon a woman, having seen none but his nanny, Ruth (Casey Lynn Moyer).

A word often used to describe this story is "lunacy," and that seems apt. As the tale unfolds, the audience discovers the pirates are far from menacing scallywags, but rather a bunch of softies with a heart for orphans. These swashbucklers find themselves on what appears to be some sort of an isolated island inhabited by a stately gentleman, Major-General (Will Hicks), and his eight Von Trapp-like daughters (Renee Landrigan, Erin Daley, Ashley De Mar, Erica Miranda Diederich, Meghan Hinton, Kayla Kreis, Kelsey Wright and Chelsey M. Zimmerman).

Frederic catches the eye of the lead daughter, Mabel (Landrigan), and is thrust into a personal battle between love and duty. To reveal more would mean spoiling a rather humorous plot twist. Suffice to say, Frederic has more pirate separation anxiety that he first expected.

Moyer is the standout performer in the land of "Penzance." As Ruth, a 47-year-old nursemaid, she comically tries to convince Frederic that her beauty equals that of a 17-year-old. The idea here, of course, is that a life of piratedom has left Ruth somewhat haggard. Though Moyer is an attractive young woman, she does a good job of convincing the audience of Ruth's physical shortcomings. Plus, the actress completely commits to sequences of physical comedy and hits her marks as a singer.

The leads, quite noticeably, resemble Hollywood heavyweights. Trinca could easily pass for Robert Downey Jr., while Landrigan is a spitting image of Sarah Jessica Parker. Nonetheless, the NU students overcome this possible distraction by portraying their characters with proficiency. He wonderfully stumbles, bumbles and fumbles as a misguided pirate, and she serves as a worthy recipient of his love (and someone worth fretting over).

Hicks is every part the distinguished chap as he dotes over his daughters and uses his braggadocio to fend off advances from the pirates.

All in all, the cast offers up a performance that merits the audience's over-the-top reaction. Despite the rigors of college academia and a short rehearsal period, the actors are in sync on stage, which says a lot considering this story's off-the-wall premise.