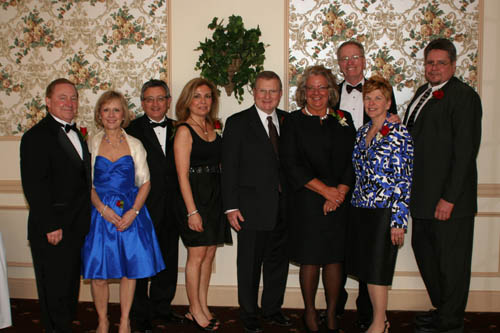 "The award is given to individuals or couples each year who have been generous to the theater with their time and contributions. Niagara University Theatre, like most arts organizations, cannot thrive without people such as those we honor," Fletcher said.

This year's honorees include four outstanding couples who are members of the Friends of Niagara University Theatre board and one extraordinary staff member. Honorees are: Michael C. Arena, Class of 1977, and Maria Arena of Clarence; William LeCuyer and Pamela LeCuyer of Getzville; John R. Sanderson, '75, and Karen L. (Glasser) Sanderson, '75, of Orchard Park; Arthur V. Traver Jr., '69, and Barbara (Nagengast) Traver, '69, of Tonawanda; and Jack Wrobel of Niagara Falls.

Like the Arenas, the LeCuyers have continued supporting NU Theatre even after their daughter Lisa LeCuyer, '08, graduated. Together, Pam and Bill LeCuyer served as auction chairs for the Friends' annual galas in 2007 and 2008. Pam served as auction co-chair from 2009 through 2011 for the gala, and Bill has been instrumental in bringing in major auction gifts and in helping co-chair various Friends fundraisers.

Alumni of Niagara University, Karen and John Sanderson were instrumental in the success of the theater's $3.1 million renovation campaign from 2007-10. Karen served on the theater initiative committee of "The Promise of Niagara: The Next 150 Years." They co-chaired the Friends of NU Theatre's gala in 2003 with Dr. and Mrs. James Burdick, and in 2005, they were gala chairs. They continue to actively support Friends activities for the benefit of the theater program and its students.

Friends of NU Theatre board members since the founding of the organization in 1986, NU alumni Arthur and Barbara Traver have both served the Friends in various leadership capacities, from treasurer to vice president to president. Currently, Art serves as treasurer of the board. From 2007-10, the couple served as co-chairs of the theater initiative committee for "The Promise of Niagara: The Next 150 Years." Like the Sandersons, the Travers were instrumental in the success of the theater's renovation campaign. They also served as co-chairs of the 2009 Friends of NU Theatre gala with board member Patricia Orzetti.

Jack Wrobel, technical director for Niagara University Theatre, has been involved in local and national theater productions since 1975. He has been part of the NU staff for 11 years as technical director, but began working with NU decades ago when the Friends of NU Theatre held their galas at Artpark, where he was an extra stagehand. From 1978 onward, Jack was on an "on call" basis working with the NU Theatre Department to build scenery. Today, as technical director, he is in charge of the scene shop and building scenery as well as drafting designs, ordering supplies, rigging, and supervising the large student construction crews that are needed for each production. Jack's expertise, easygoing manner, and dedication are treasured by Niagara University Theatre's administration, faculty, staff and students. Outside of Niagara, Jack has worked in various positions on the Artpark stage for the past 36 years. He is now master carpenter there, so when the academic year is over at NU, you can find him at Artpark. Jack is also a member of the International Association of Theatrical Stage Employees Local 121 of Niagara Falls.