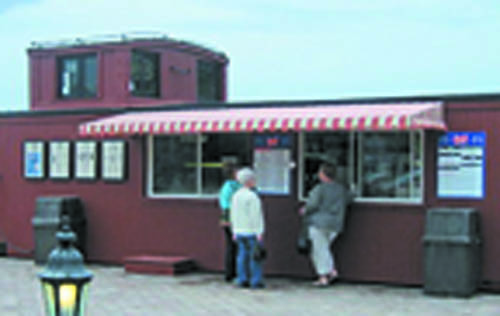 Boasting new equipment and offerings, the Caboose joins the Silo in welcoming customers for the 2011 season.

Although it may not seem like its spring in Western New York, The Silo restaurant in Lewiston has opened for the season, hoping to give diners a reminiscent taste of springtime. Located on Lewiston's waterfront, The Silo has had one of its most tremendous seasons throughout the past year. After being featured on an episode of the Travel Channel's "Man v. Food," manager Alan Hastings describes The Silo's recent endeavors with great enthusiasm.

"Just when we thought things couldn't get any better, we continue to move forward," Hastings said of The Caboose - his most recent addition to the restaurant. After years of fighting for ownership and use of a wooden caboose, Hastings can finally call himself the proud owner. Originally built in 1890 as a wooden boxcar, it was converted into a caboose in the 1930s and de-railed in the 1970s. After seeing such potential in the historical structure, Hastings decided it would make the perfect home for The Silo's assortment of ice cream.

For the 2011 season, The Silo proudly boasts $75,000 worth of new, top-of-the-line ice cream equipment that will deliver better product more efficiently to the customer. Additionally, the caboose increased space, which leads to a larger variety of ice cream flavors as well as the inclusion of a new line of healthy smoothies and pro-biotic, low-fat, soft serve frozen yogurt. Ice cream enthusiasts will be pleased to find that sizes will now be even larger than before. Within The Silo, more menu options are available as well as new natural cut french fries.

"We are now offering something healthy and delicious," exclaimed Hastings of the new ice cream item menus.

Furthermore, smelt lovers will be pleased to hear that the beloved fish is currently being offered on the menu. The restaurant is well prepared for this year's Smelt Festival, coming up on Friday, May 6, at 6 p.m.

With such attractive improvements within the restaurant, Hastings is excited to welcome the new season as well as possible new employees. He invites those interested to stop by and pick up an application.

Whether it's a bite to eat or some ice cream for dessert, let the Silo remind you that despite the weather, spring must go on!