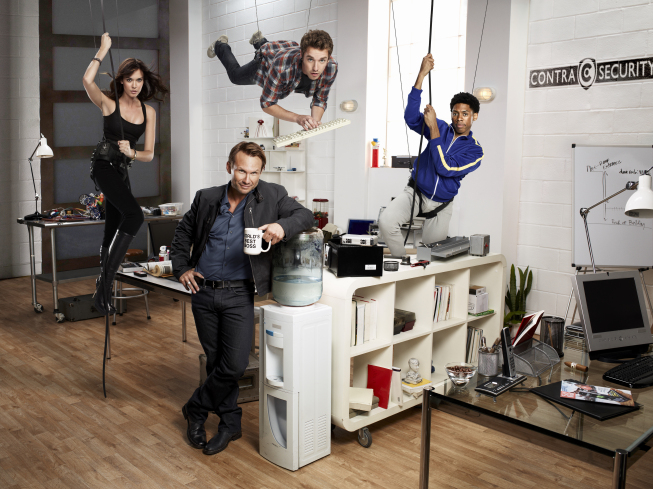 He's played a skater in "Gleaming the Cube," a drug pusher in "True Romance," a baboon organ recipient in "Untamed Heart," and George Kuffs in "Kuffs" (my personal favorite). But now, Christian Slater has finally found the perfect role.

In "Breaking In," the new FOX comedy with the plush post-"American Idol" timeslot, Slater stars as the head of Contra Security. His character, Oz, is a slick, sarcastic, talented security expert hired to prevent the wrong people from breaking into the right places.

"I mean, it's a great gig. Great people. I get to wear shades and smoke a cigar and sit in the Kirk chair. I mean, life is good," Slater says cheerfully.

Though he's played caricatures of himself in cameos on "The Office" and "Curb Your Enthusiasm," Oz is, in many ways, the most grandiose, envelope-pushing version yet. Slater was attracted to the role because of the character's eccentricities, humor and admiration of sci-fi - all traits shared by the actor.

"I do like the fact that he is an eight-moves ahead kind of guy," Slater says. "You know, he pretty much knows what the outcomes are going to be right from the get-go, which I really appreciated and I like. I think it's nice to have characters like that on TV. It makes people feel safe and comfortable. Even though it's a made up character it still, I think, makes people feel safe that there's somebody out there like that, potentially. I like that he's in charge. I like that he likes to have fun, that he doesn't really take things all that seriously and he's just kind of a guy - a very mysterious guy, and there's definitely a lot more going on beneath the surface than he's revealing."

Though his previous two television shows failed to earn a second season (NBC's "My Own Worst Enemy" and ABC's "The Forgotten"), Slater decided to return to the small screen because he enjoys "the consistency of it. I like the pace of it," he says. "With the first two experiences I had, I really did respond well to the schedule. It's a very, very fast moving train. I don't like sitting around. I really like to get in there and do the job and get it done and feel good about it at the end of the day. And that pretty much seems to be the vibe on all the sets that I've gotten to be a part of."

With "Breaking In," Slater says, "I'm going to use this show, hopefully, as an opportunity to exercise every kind of fantasy that I can get away with on national television!"

And, in following primetime's highest-rated series, "American Idol," for the rest of the season, Slater is confident the third time will be the charm.