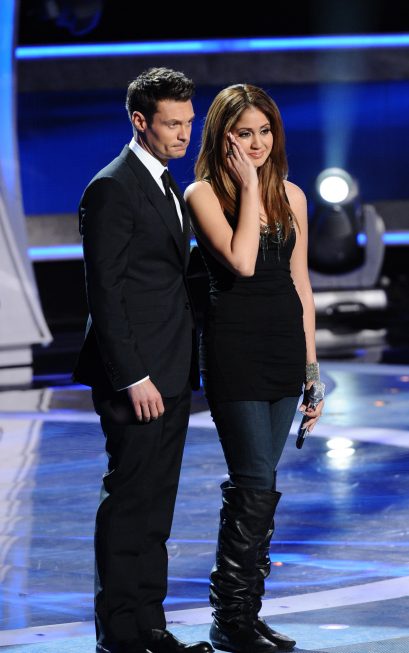 Finalist Karen Rodriguez was eliminated Thursday on "American Idol" after she received the fewest of America's votes. On Wednesday's performance show, the Top 12 performed songs from the year they were born, and Rodriguez, 21, from New York, N.Y., sang "Love Will Lead You Back."

During the show, host Ryan Seacrest announced that viewers can help those affected by the recent tragic events in Japan by donating much-needed funds. Donations will be accepted via text messaging by texting REDCROSS to 90999. A $10 donation will be added to the user's mobile bill, and proceeds will go to the American Red Cross to help its efforts in Japan. Messaging and data rates may apply. Visit www.mgive.org for terms, conditions and additional information.

In addition, "American Idol" announced last night that profits from the sales of the "American Idol Top 12 Season 10" compilation album and the individual performance downloads from the album between now and the end of the season will benefit the American Red Cross and its relief efforts in Japan.

Tune in the following night, Thursday, March 24 (8 p.m. ET live/PT tape-delayed), to the live results show to find out who receives enough votes to stay in the competition and who is sent home. Also, season three finalist and Academy Award winner Jennifer Hudson will return to "American Idol" to perform. Multi-platinum country music duo Sugarland will also perform.