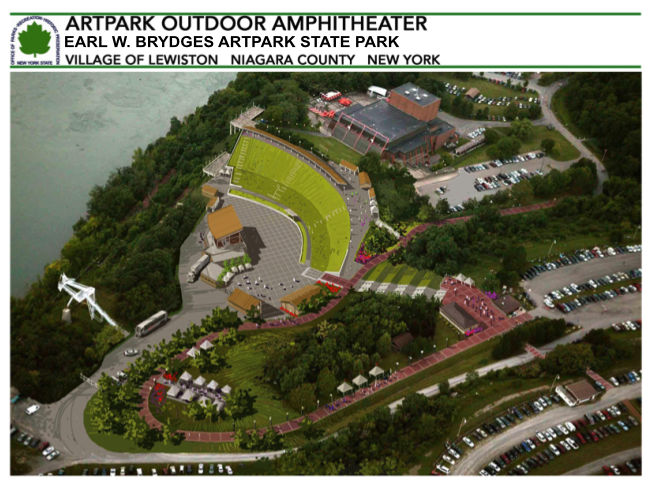 A view of the proposed Artpark Outdoor Amphitheater expansion as designed by Buffalo's Wendel Duchscherer Architects and Engineers.

•Updated at 9 p.m. ... Read the full report in Saturday's Sentinel

Artpark has outgrown its space, and it's time to expand.

So said representatives from Artpark & Company and the New York State Office of Parks, Recreation and Historic Preservation at a public hearing Tuesday night at the Village of Lewiston Hall.

"We're all here because of the success of Artpark," said Mark Mistretta, a senior planner for Wendel Duchscherer Architects and Engineers, the Buffalo firm that designed the proposed new Outdoor Amphitheater layout. "It's just a fantastic resource."

Due in part to larger crowds, a lack of amenities for non-music programming, and a desire to bolster safety, comfort and aesthetic elements, the park "needs further direction," Mistretta said.

"We're rearranging it to make it more user-friendly and safer for the patrons of the venue," he added.

The public hearing was in regards to the Draft Environmental Impact Statement on the proposal to upgrade and expand the amphitheater and support facilities at the Earl W. Brydges Artpark in Lewiston. Artpark & Company manages the performing arts venue.

"Tonight's hearing is an important part of the environmental review process," said environmental analyst Karen B. Terbush, who moderated the event. "Our job is to listen; to understand. ... We're not here tonight to judge or debate but to record."

According to State Parks, the proposed modifications are intended to improve the condition of the facilities at the park and to enhance public enjoyment of them. Additionally, due to the demolition of the former ART-EL structure, there is a priority need to provide replacement buildings, structures and other facilities that can accommodate family-orientated programming and visual arts programs.

Artpark opened in 1974 as a unique public park focusing on the performing and visual arts in a picturesque natural setting on 150 acres overlooking the Niagara River Gorge. Facilities include the Mainstage Theater building, the Outdoor Amphitheater and a range of outdoor activities, such as picnic areas, hiking trails and fishing docks. The Mainstage Theater accommodates indoor seating for up to 2,400 visitors, with additional outdoor seating in the adjacent lawn area that can be used when the rear wall of the theater is open. The Outdoor Amphitheater offers an outdoor stage with a sound system and tiers of outdoor seating with no formal seating (patrons provide their own chairs). The facilities also include concessions and restroom facilities. Over the 2010 summer season, 300,000 people attended Artpark's summer programs, shows and concerts. An additional 250,000 or more visited the park's nature trails, historic sites, picnic areas, rivershore docks and other natural amenities.

The preferred concept plan being proposed for consideration is a multipurpose, upgraded and expanded outdoor amphitheater facility including a full range of improved support and ancillary facilities for the amphitheater and facilities for family-oriented and visual arts programs.

The primary purpose of this project is to significantly upgrade the existing, deteriorated amphitheater and support facilities to better accommodate the current level of attendance and provide a proper venue and support facilities for the types of entertainment now being brought to the facility. The entire facility is in a deteriorated condition and in need of repair and renovation.

Artpark and Co. Board Chairman Christopher Brown said the ideal timetable would include construction on the $4 million project this fall, en route to a grand reopening in time for summer 2012 programming. At this point, he said more than half of the money is in place. The other half would likely come from Greenway Plan/New York Power Authority relicensing funds or related sources. Brown doesn't expect any money to come from village or town taxpayers.

About a half-dozen village residents spoke at the public hearing, and each expressed concern over the noise and parking issues related to Artpark's popular "Tuesday in the Park" concert series. Terbush said all remarks would be recorded and included in the Environmental Impact Statement chapter titled "Comments and Responses."

Copies of the DEIS are available for public review at the park and Niagara Falls State Park administration office at Prospect Point, as well as at the Lewiston Public Library. The DEIS is also available online at: www.nysparks.com/inside-our-agency/public-documents.aspx.

For those who could not attend Monday's meeting, written comments may be e-mailed to [email protected] or the following address by March 25: Mark Thomas, western district director, NYS Parks, P.O. Box 1132, Niagara Falls, NY 14303.