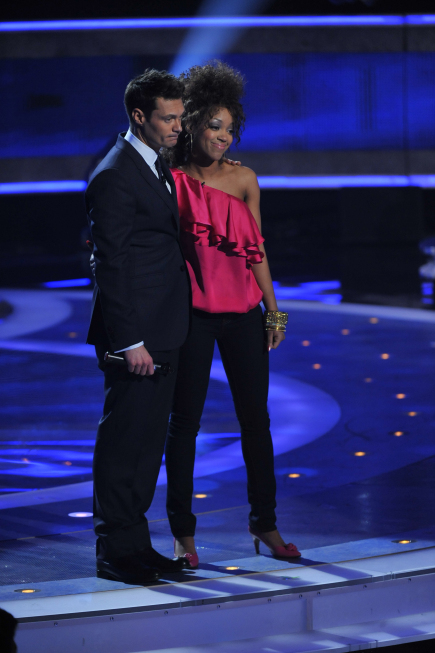 'Judges' Save' returns again this season

Finalist Ashthon Jones was eliminated last night on "American Idol" after she received the fewest of America's votes. On Wednesday's performance show, the Top 13 performed songs by their music idols, and Jones, 24, from Valdosta, Ga., sang "When You Tell Me That You Love Me."

It was also announced that the "Judges' Save" returns this season. Like last year, up until only five finalists remain, the judges - if they unanimously agree - have the option to save from elimination the finalist receiving the lowest number of votes. The judges do not have to save a finalist during the competition. However, if they choose to use the "Judges' Save," they may only do so once during the season. The following week, the two finalists receiving the lowest number of votes will be eliminated.

Tune in the following night, Thursday, March 17 (8 p.m. ET live/PT tape-delayed), to the live results show to see performances by Grammy Award-winning, multi-platinum pop superstars The Black Eyed Peas and "American Idol" season nine winner Lee DeWyze, as well as to find out who receives enough votes to stay in the competition and who is sent home.