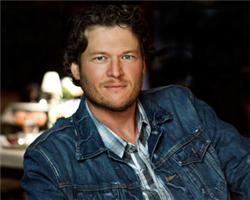 "We couldn't have a panel that represented the hottest American music without a strong country presence, and Blake is at the top of his game right now," said Telegdy. "Not only is he incredibly charismatic, but his passion for collaborating with and bringing the best out of other talented artists makes him the perfect choice to round out this 'Dream Team' of musician coaches."

"I'm not sure 'The Voice' knows what they signed on for by bringing me on the show," joked Shelton. "I know this for sure; Christina, Cee Lo, Adam and I are going to have a blast and I am extremely excited to be part of a show that recognizes true vocal talent."

The Oklahoma-born Shelton made his debut with the single "Austin," released from his self-titled first album that later became gold-certified. The song occupied the top spot on Billboard's Hot Country Songs charts for five weeks.

His other popular albums include "Pure BS," "Startin' Fires," "Hillbilly Bone," "All About Tonight" and "Loaded: The Best of Blake Shelton" (his first compilation album). The albums yielded such hit singles as "Ol' Red" (considered Shelton's signature song), "All Over Me," "The Baby," "Some Beach," "Goodbye Time," "Nobody But Me" (which appeared on the television movie "The Christmas Blessing"), "Home," "The More I Drink," "Don't Make Me," "She Wouldn't Be Gone," "I'll Just Hold On," "Hillbilly Bone," "All About Tonight," and more recently, "Who Are You When I'm Not Looking."

In addition, Shelton's duet with Trace Adkins, "Hillbilly Bone," reached No. 1 last year and won every country collaboration award from the Country Music Association, Academy of Country Music, CMT and ACA Award shows. He also collaborated with his fiancée, Miranda Lambert, for their No. 1 hit single "Home" and Hillary Scott (Lady Antebellum) on "Suffocating."

On "The Voice," four musician coaches - Shelton, Aguilera, Green and Levine - will each select singers to mentor into artists during the blind auditions. Once they have their teams, the star coaches will bring in their personal songwriters, producers, and high-powered friends to help their teams evolve. Ultimately, America will decide which singer will be worthy of the grand prize.

Hosted by Carson Daly, the show's innovative format features three stages of competition. The first begins with the blind audition, then the competition enters into a battle phase, and finally, the live performance shows. The show's casting team is working with the music industry and searching the country for the best singers to bring to the blind audition process.

During the blind auditions the decisions from the coaches are based solely on voice and not on looks. The coaches hear the contestants perform, but they don't get to see them thanks to rotating chairs. If a coach is impressed by the contestant's voice, he/she pushes a button to select the contestant for his/her team. At this point, the coach's chair will swivel so that he/she can face the contestant he/she has selected. If more than one coach selects the talent, the power shifts to the contestant, who may choose which coach he/she wants to work with throughout the competition.

Once the teams are set, the battle is on. Coaches will dedicate themselves to developing their singers, giving them advice, and sharing the secrets of their success. During the battle rounds the coaches will pit two of their own team members against each other to sing the same song together in front of a studio audience. After the vocal face-off, the coach must choose which of his/her singers will advance.

At the end of the battle episodes, only the strongest members of each coach's roster remain and proceed to the live stage shows. In this final performance phase of the competition, the top contestants from each team will compete against each other during a live broadcast. The television audience will vote to save one talent on each team, leaving the coach to decide live who they want to save and who will not move on.

At last, each coach will have his/her best contestant left standing to compete in the finale. From these four, one will be named "The Voice" - and will receive the grand prize of a recording contract and $100,000.

"The Voice" is a presentation of Talpa Productions, Mark Burnett and Warner Horizon Television. The series was created by John de Mol, who will executive-produce along with Burnett and Audrey Morrissey.