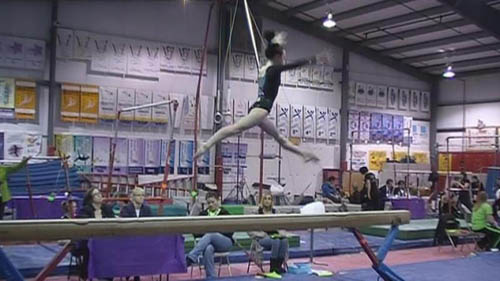 Samantha Peterson on the beam.

In the 7-9 age group, Jenna Peterson, a fourth-grader at Errick Road Elementary, placed fifth all-around for her age group with an overall score of 34.625.  She placed fourth on bars with a high score of 8.9. She also placed sixth on beam and seventh on vault.

For the 11-year-olds' age group, Samantha Cirrito, a fifth-grader at West Street Elementary, placed eighth all around with an overall score of 34.50. She placed second on bars with a high score of 9.3.  She also placed sixth on floor and 12th on vault.

Erica Weber, a fifth-grader at West Street, placed 11th all around with a score of 33.175.  She placed fifth on bars, seventh on beam, eighth on floor and ninth on vault.

In the 12 and up group, Samantha Peterson, a seventh-grader at Edward Town Middle School, placed fifth all around with an overall score of 34.250. Her high score of the day came on beam, 9.4, which earned her second place for the event. She also placed fifth on floor and ninth on bars.