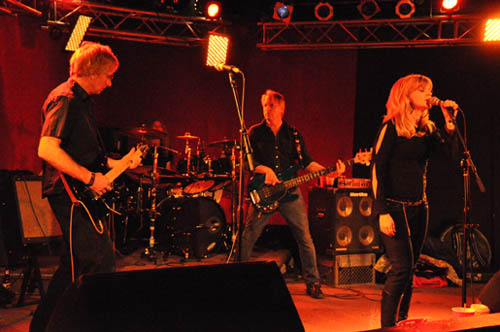 The Furies to play at Water Street Landing

"The Furies can be described in one word: fun," so said lead singer and "goddess of the tambourine" Rebecca Leigh. The Furies is an upbeat driving rock band that intersperses its original music into set lists. The band covers songs from artists ranging all the way from Lady Gaga to Led Zeppelin. Hits from Katy Perry, Blondie, Duffy and Billy Idol make their way into set lists as well, showcasing the band's diverse music.

Their lively shows pack the dance floor. Leigh beamed as she described the fun the band has while they are performing. "We all lose about five pounds every time we perform," she said. "We have fun; we have a ball with what we are doing."

British Invasion, Roots Rock and Pop have influenced the band as a whole. "We find music that inspires us and that we like moving to. We play what we love," said Leigh.

Bassist Doug Amey, drummer Tommy Harris Jr. and lead vocal and tambourinist Rebecca Leigh have been together for two-and-a-half years. Guitarist Glenn Litwiller, their newest member, came along five months ago, forming what the band calls "a match made in heaven." Speaking about her recent move to Lewiston, Leigh could not speak more highly of the town. "Lewiston is a wonderful city for music," she said as she listed off numerous free concerts she has had the privilege of attending at Artpark.

Preschool teacher by day, energetic rocker by night, Leigh works at Wee Care Daycare in Youngstown. When it's time to perform she brings out her inner rock star. Originally from Alabama, Leigh has always had a passion for singing and performing. After being away from performing for a few years, she realized she had to return to what she loves to do. Speaking for her bandmates' shared passions Leigh said, "We love to perform; its part of whom we are. We would probably shrivel up and die if we couldn't perform."

Leigh has been having fun with recent covers such as Lady Gaga's "Beautiful, Dirty, Rich" and The Bangles' "Walk Like an Egyptian." She is particularly excited about "Walk Like an Egyptian," because she is able to play both the tambourine and the rhythm guitar throughout the song. How does she do this, you might wonder? She was able to enthusiastically demonstrate this in the middle of a coffee shop as she put her imaginary tambourine between her knees and began to strum her imaginary guitar.

When asked about her bandmates, Leigh spoke of them in such awe and with great humbleness. "I share the stage with three amazing musicians. I feel honored to play with these guys, I really do," she said as she described each personality that collectively creates The Furies.

Leigh shares lead vocals with bassist Amey. Originally from the LA area, Amey spent a few years touring with the popular '90s cover band Smithereens. After touring all over the country, Amey eventually came to the East Coast, and, as they say, the rest is history. "He is a phenomenal song writer with the voice of John Lennon," Leigh said with certainty.

Tommy "TomTom" Harris is a "force of nature" as affectionately described by Leigh. Harris, originally from Long Island, has been around music his whole life. Leigh describes him as, "the most outrageous drummer you will ever see." His ability to play in the styles of jazz and progressive fusion enable him to play anything. Harris is heavily influenced by Gene Krupa, Buddy Rich, Keith Moon from The Who and Billy Cobham.

Leigh was flattered when she heard the rumor that people were coming to see "the blonde" perform. However, it was a shock to all as they realized it was "TomTom" who attracted fans with his long blonde locks and incredible drum solos.

"We have a whole bunch of fun with him," said Leigh of the group's positive spirits and dynamic with "TomTom."

Litwiller, guitarist for The Furies and a Buffalo native, can be credited for bringing the band to western New York.  Litwiller is heavily influenced by guitar-driven rock 'n' roll.

"There is such an energy that comes from his playing," describes Leigh.

After touring all over New England in mainly cover bands, Litwiller felt it time to start writing his own. Leigh describes the moment The Furies met Litwiller as a shared desire for one another.

"He really liked our music and he was like, 'Please let me play with you!' And we we're saying, 'Please come play with us!' " she said.

Leigh jokingly declared that Litwiller suffers from GAS: gear acquisition syndrome. Litwiller owns numerous guitars, and recently parted ways with his Fender Telecaster only to request visitation rights from Leigh. According to Leigh, Litwiller is quick to admit it is a problem. He defended himself against her accusation of his GAS quite well by saying, "I wish I had more hands so I could play them (guitars) all at once."

With such a great band dynamic and a diverse set list, it is obvious why The Furies have so much fun. Although they love performing, they love getting people moving to their music even more.

"You're not just listening to a jukebox; you're going to want to get up and move," said Rebecca excitedly as she spoke of the enjoyable atmosphere The Furies create through their music and performance. "People are gonna have fun when they come to see us because we have fun!"

When you head out to Water Street Landing on March 11, plan on having a good time and, as Leigh said before we parted ways, "bring your dancing shoes!"