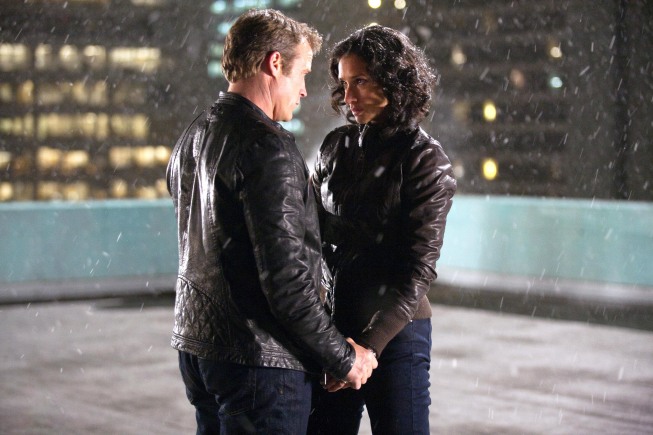 Mark Valley says he has a copy of the first season of "Human Target" on his shelf. That's not the kind of thing every actor would admit to, but the star of the FOX series says he's proud of what the cast and crew accomplished last year.

"In some ways we've had the ability or we've been fortunate enough to have a show in the first season that in all likelihood probably would not have gone on to a second season if there hadn't been some changes," he says. "I was just fortunate enough to have been able to stay on the show and to kind of see what it would look like under a different interpretation.

"It's sort of like watching - people say, oh, they want to watch a movie; it's going to be redone by someone else or watching a play that's going to be redone and revived. I just want to make sure that it's clear that I've really been fortunate to have been on a second season (and) to be able to see the different interpretation of how the show goes."

That new interpretation has led to improvements on the series in season two.

"The second season, the biggest difference was we have a couple of new characters," Valley says. "We have Indira (Varma) and Janet (Montgomery), who have brought some really cool characters to the show (in billionaire Ilsa Pucci and master thief Ames). We also have a different showrunner, Matt Miller. In the best of circumstances, we've also had the showrunner from the first season, Jon Steinberg, stay on as an executive producer. So we've kept elements of the first season as well. All the experiences we had from shooting and planning and writing and producing are also being kind of brought to bear on the second season and going forward as well. So, we've been really fortunate to bring some new people in with some new ideas and some different types of skills and abilities, but also kind of profit from the first season as well."

"Human Target" wraps its second season with episodes tonight and next Wednesday (both at 9 p.m. ET, following "American Idol"). Chance, the repentant hitman turned hired gun for those in danger, discovers some troubling information about Ilsa's late husband, super-rich philanthropist Marshall Pucci. In the meantime, the relationship between Chance and Ilsa starts to change.

Valley, playing coy, says there are "hints of possible romance going on" and "two people get a little bit closer than you've seen them before."

"It won't be a cliffhanger in terms of the way last season was, but it does sort of complete the second season while leaving a lot of uncertainties in terms of relationships," Valley says. "I guess nobody is really in physical peril ... (but) we don't really know where some relationships are going to go at the end of the season. But it also feels like this is a team that's going to be able to stay together and keep working."

Though the enhancements to "Human Target" make it worthy of a third season, the show hasn't quite secured an audience size that would guaranty such a result.

FOX execs are expected to announce the net's fall schedule in May.

If Chance does return, Valley suggests the hero get out a little more.

"I think Matt has done a great job of kind of establishing who these characters are and where they're going, so I'm really interested to see what his ideas would be for a third season overall," Valley says. "I mean, now that we do know who these people are and we do know where they're from, maybe we can kind of move on to other cases that don't necessarily involve people in a personal way. Maybe the show can kind of find its feet there?"